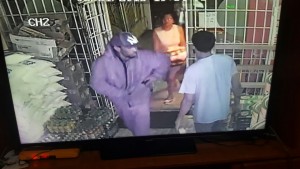 The image of one of the bandits captured from surveillance video.

Armed bandits Wednesday night invaded a supermarket at Covent Garden, East Bank Demerara and ordered the owner, staff and customers to lie face down on the ground before carting off more than GYD$1 million in cash and valuables,  the owner said.

The incident occurred at about 7:34 PM on August 31, 2016 at Fresh Mart Supermarket, Coverden Public Road, East Bank Demerara. No shots were fired and no one was injured.

The owner is offering  a GYD$1 million reward for vital information that would lead to the arrest of the robbers.

The owner said since the incident police arrived on the scene but said they were unable to collect fingerprints because they “closed off” for the night.  The owner said up to Thursday morning investigators were yet to return to take fingerprints.

“This is not the first time we got robbed. Sometimes I don’t report it but this is a big one. I am very disappointed because of the slothfulness of the police,” he said. However, a senior investigator explained that fingerprints cannot be taken in the night because crime scene experts need sunlight. 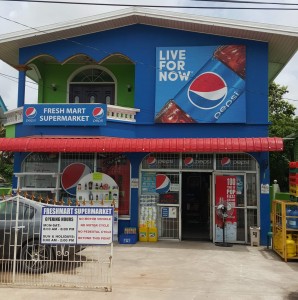 The staff members were about to balance their takings for the day when three gun-toting men, two of whom were masked, entered the supermarket and ordered them and two customers to lie face down.

The owner said a lone bandit robbed the supermarket last month and threatened to send gunmen to shut down the business. The owner said he is tired of reporting incidents at Providence Police Station because they are not taking his reports seriously and, in one instance, a detective tried to fleece him of GYD$2 million.