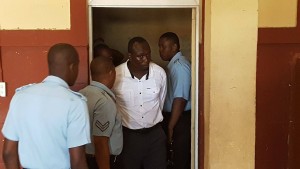 The man, who allegedly shot dead another man and seriously injured his girlfriend after they drove up in a heavily tinted car on his bridge, was charged with murder.

A neatly dressed Robert Benn of TucVille, Georgetown was handcuffed and shackled before he was taken to courtroom at the Georgetown Magistrate’s Court.

He was charged with the murder of 25-year old Colin Perreira at Perry Street, TucVille at about 9:10 PM on August 23, 2016. Perreira’s girlfriend, Gail Ann-Chacon, has been seriously injured.

After the charges of murder and discharging a loaded firearm with a view to committing a murder were read to Benn by City Magistrate, Leron Daly, he was remanded to prison until September 16, 2016. 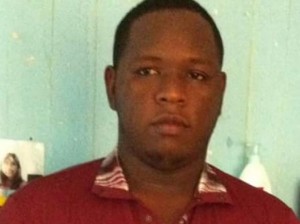 The courtroom was packed with relatives of the dead man and the accused.

The Defence Lawyer is Ronald Burch-Smith and the Prosecutor is Shevonne Jupiter.

Police investigations have so far revealed that Perreira was driving a heavily tinted motor car, with the other victim seated in the front passenger seat, attempted to turn around the vehicle, on the space in front the suspect’s residence. “In the process, the suspect who was in his yard, drew his licensed handgun and discharged several rounds at the vehicle, hitting the victims about their bodies,” police said.