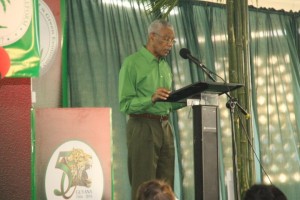 “We are an ideological party and our ideology is inspired largely by the ideas of Forbes Burnham, our Founder-Leader,” the PNCR Leader told the opening of his party’s 19th Biennial Delegates Conference at Congress Place.

After Burnham died on August 6, 1985, his successor, Desmond Hoyte, eventually abandoned Guyana’s socialist experiment, scrapped state control of the commanding heights of the  economy and shifted radically to a market-oriented system backed by radical political reforms including free and fair elections.

Former PNCR Leader, Robert Corbin, when asked whether his party is still socialist, said his political organisation has “never given up its basic beliefs” to build a society in which Guyanese have equal opportunities to develop themselves fully. “Everyone knows that the basis of Mr. Burnham’s philosophy had been on the basis of socialism,” said Corbin who served in the Burnham and Hoyte-led governments.

Granger said Burnham’s posture against the injustices of colonialism was influenced by the domestic conditions in British Guiana, the international situation and intellectual currents in the British Empire and the common destiny of the Caribbean peoples.  “His ideas grew out of the historical experiences and social action and he used those ideas to transform society,” said Granger, a Retired Brigadier, who was responsible for political education in the Guyana Defence Force (GDF) while Burnham was leader.

Delivering his address a short distance from a huge bust of Burnham, the PNCR Leader said Burnham was also motivated by the socio-economic conditions at that time. “The unequal distribution of wealth and the denial of opportunity to the masses at the global, regional and local levels combined to mould Forbes Burnham’s thoughts,” he said.  Granger credited his predecessor with responding to an unfavourable social environment with a determination to change Guyana in fundamental ways by the creation of equal opportunities and nationalism including the protection of Guyana’s sovereignty and elimination of foreign domination.

Granger said during the past four years, the PNCR has sought to institutionalize Burnham’s ideas to ensure that they continue to inform future leaders and inspire future generations. Those initiatives  are the Burnham Education Scholarship Trust that awards bursaries to children after they pass the National Grade Six Assessment Examinations, the Burnham Book Trust that publishes and reprints texts of Burnham’s Congress and other major political speeches  and the establishment of the Burnham Research Institute. “It will continue to operate separately until the Government of Guyana reclaims red House so that they could become a research institute for all presidents of this Republic,” he added.

Granger , who places heavy emphasis on education and history, has adorned several rooms of the Ministry of the Presidency with huge copies of a photograph in which then Prime Minister Forbes Burnham had received the instrument of Independence from Britain’s Duke of Kent.

The President has been also pushing the need for Guyana to produce large quantities of food to supply local and Caribbean markets.

President Granger again reiterated his position on several areas including discrimination, corruption, the creation of a green economy and generally the political environment.

The opposition People’s Progressive Party’s (PPP) constitution still includes references to Marxism-Leninism, which party ideologues say they use to analyse society. While in office, the PPP had endorsed the growth and development of the private sector.