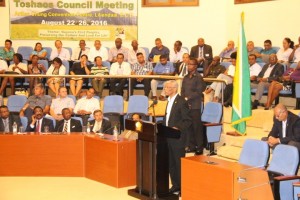 President David Granger on Monday recommended the formation of an authority oversee and fast-track the implementation of decisions by the National Toshaos Council (NTC) and other decision-making bodies;  an announcement that has drawn sharp criticism from shadow Indigenous People’s Affairs Minister, Pauline Sukhai but welcomed by the NTC Chairman.

Granger envisaged that a five person National Indigenous People’s Authority (NIPA) to implement decisions by the NTC, Cabinet and the National Assembly because of the fragmented system in place spread across several ministries to address various problems in health, economy, physical infrastructure, social protection, culture, environment. 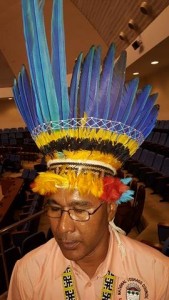 NTC Chairman, Joel Fredericks welcomed President Granger’s announcement, while at the same time stating that he would prefer NIPA to include two NTC representatives. “I believe it’s a good idea from the President and I support it and I believe the Toshao Council should be a part; at least one or two members should be a part of the five member team to make things happen because we are the people who go out in the fields and we know the issues out there and we can easily communicate with our people and bring back information so His Excellency (the President) can be well-informed,” he said. 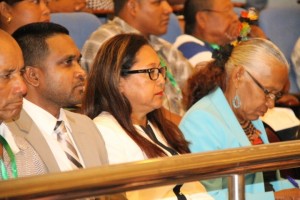 The opposition PPP-Civic’s parliamentary spokespersons on Amerindian Affairs: Nigel Dharamlall, Pauline Sukhai and Yvonne Pearson at the opening of the 2016 National Toshaos Council Conference at the Arthur Chung Conference Centre.

Ministry’s role, but said that is “my speculation” at a time when there are two ministers of indigenous peoples, highly technical staff and the NTC.

Asked what she thought was required to fast-track decision implementation by the NTC, she said government needed to provide lots more money to fund a range of activities. Sukhai said she did not give much thought to the possibility that there could be lots of cash available but no administrative mechanism to implement decisions.

Sukhai reiterated that nothing has been done to resolve outstanding land-related issues, and the construction of a dormitory for tertiary level students who are in Georgetown although money has been budgeted for the structure.