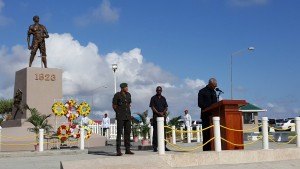 President David Granger announced that Government will erect in remembrance of the executions of more than 200 Africans, during the Demerara Revolt 1823, during his address at the Commemorative Ceremony at the Monument on Atlantic Avenue.

Under intense pressure from sections of the Afro-Guyanese community to construct a monument at Independence Park (Parade Ground) where slaves who fought in the 1823 Demerara Revolt were executed, President David Granger on Saturday announced that a memorial would be built there.

“The government will erect a memorial at Independence Park to commemorate these executions. Future generations must not forget that freedom was bought at a high price, the price of martyrdom of hundreds of Africans on the 20th of August, 1823,” he said. No time frame was given.

Saturday marks the 193rd anniversary of the killing of hundreds of Africans, two days after the revolt had begun and 10 years before Britain had legally abolished slavery with the passage of the Emancipation Act. “This atrocity, the arrests and subsequent executions at the Militia Parade Ground and elsewhere were, perhaps, the single most significant event to hasten the abolition of slavery in the British colonies. The Demerara Revolt was the turning point in slave society and is commemorated today as one of the most important events in Guyanese and Caribbean history,” said Granger, a former military officer and historian.

The 1823 Coalition for the Parade Ground Monument, which had vehemently opposed the construction of the existing monument at the Kitty Seawall by the then People’s Progressive Party Civic (PPPC) government, welcomed Granger’s announcement and buckled into recognising the current monument.

Executive Member of the African Cultural and Development Association (ACDA), Violet Baptiste applauded Granger for announcing that a memorial would be built at Parade Ground. “We have struggled long and hard to get the government to acknowledge Parade Ground as a historical site and now that President Granger has done that, I think we are on the right track,” she told Demerara Waves Online News.  She hailed the President’s decision to attend the commemorative activity at the Kitty Seawall-based monument, saying that that revolt was a major blow to slavery in the British colonies. Baptiste credited Granger with consulting and reasoning with representatives of the Afro-Guyanese community after they learnt that he was planning to speak at the Kitty Seawall.

Head of the Coalition, Rudy Guyan said the President has acknowledged a monument at Bachelor’s Adventure where slaves were killed during an uprising in 1823. Guyan said the monument at the Kitty Seawall recognises the decapitation of slaves’ heads and placed along the East Coast Demerara. “I don’t think anything was done sufficiently to address that. This monument ironically should be addressing that. It is facing the east; it is facing the direction where those things happen and we should acknowledge the place of this monument in that particular episode of the 1823 Revolution,” he said.

He welcomed announcement by the President that a memorial would be built at Parade Ground where mock trials were held, slaves heads were cut off and placed around that open space. “We are saying before the President we were confused about this particular two episodes. Now we are clear that we have given support to every section of the remembrance of the murders of our people in 1823 Revolution so there is no contradiction. This monument here doesn’t represent a contradiction but it represents a well-meaningful addition to the remembrance of our people,” he said.

Guyan assured that the monument at Parade Ground would not merely be a piece of concrete, but would include an area that would provide meaningful education to Guyanese concerning the country’s history.

Executive member of the 1823 Coalition for the Parade Ground Monument, Dr. Melissa Ifill remained adamant that Granger should not have spoken at the monument. She claimed that the President opted to speak at the 1823 Monument after he refused an invitation to speak at a commemorative event by an African village because the the small monument the village had built to commemorate the rebellion was rudimentary and was situated around a pig pen so the area was ‘smelly’ and wasn’t befitting of a ‘national’ commemoration and certainly not worthy of his presence.

“Ah the contempt for poor/working class people and their genuine efforts continue unabated in this land of ours. Do you know where is worthy of the president’s presence and speech? Yes, you guessed it .. the Monument built by the PPP, that was vehemently protested by African Guyanese that Granger himself criticized when he was opposition leader and seeking votes.

The same government that Granger had accused of murdering hundreds of young Afro-Guyanese men and discriminating against African Guyanese … yes, that one. why? well because it cost 50 million of our dollars to build and as head of the government he can’t ignore a monument built by government with taxpayers dollars. I’m speechless. Guyana got many, many problems and I will say it – this APNU-AFC government is one of them,” said Ifill on her Facebook profile.

The Coalition Head, however, labelled Ifill’s stance “an opinion of the past” and noted that she was absent from a meeting with President Granger earlier this week when it was explained that the current monument at the Kitty Seawall respects  and acknowledges Afro-Guyanese history while not negating what would be built at Parade Ground. “Anything that negates the Parade Ground I will not support. In fact it gives that drive, it gives that urgency to what we will do at the Parade Ground,” he said. Guyan believed that if Ifill was in the meeting with Granger  “she would have reformed her opinion.”