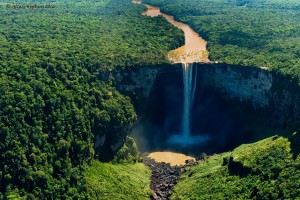 A mining operation ,which was in April 2016 caught operating in the Kaieteur National Park area, will pay a fine of $7 million to the Guyana Geology and Mines Commission (GGMC), the Ministry of Natural Resources said Friday.

The ministry said Ceso Alves De Alcantara, a national of Brazil, was fined after a raid by the Ministry of Natural Resources and the GGMC in the Kaieteur National Park Buffer area found equipment in the form of a dredge No. 9827 and a Doosan excavator engine No. DHKCEFALTB, which belonged to him, operating there.

The equipment was detained and charges were prepared against Mr Alcantara.

“In discussions on August 4 and 5, 2016 Mr Alcantara indicated that he fully regretted the situation, that he was almost ruined and has become ill with worry since the situation unfolded,” said the Ministry of Natural Resources.

Authorities said Mr Alcantara’s equipment is to be removed from the buffer area to Grass Falls with the understanding that there should be no future issue arising from his operation working near prohibited areas or without permission.

The Ministry of Natural Resources and the Guyana Geology and Mines Commission said they believed that this the fining of the miner “sends a strong signal that there is a zero tolerance approach towards mining in protected areas and outside of the law and that stern action can and will be taken against those found doing so.”

The GGMC and the Ministry of Natural Resources say they continue to demonstrate their seriousness about meting out the measure of the law to those bent on breaking it.