Company that built Kato Secondary School willing to fix defects, but was never told of any

The company that built the Kato Secondary School on Thursday sought to debunk government’s criticisms about the quality of the construction while at the same time saying that it would be willing to fix the defects.

The company said it was also willing to pay 50 percent of the cost to have coring and compression strength test-the only acceptable industry standard- conducted on the building to verify beyond doubt the strength of the concrete.

During a media tour of the school, Rodrigues Architects Limited said it would cost more than GYD$140 million to fix the problems at the school which was built for 400 students.

KARES Engineering said it built the school to specifications and in keeping with changes requested by government, but the company was never told of problems within the defects liability period. “The building has a few cracks which is common to concrete structures and could have been corrected under the defects liability period. This was never requested,” the company said in a statement.

The project was completed, within budget, accepted and received by the Government of Guyana without complaint on its completion. “The building meets and in many cases exceeds the contract specifications. This was accepted by the supervising consultant. All specifications and changes in design or materials were made by the Government of Guyana and passed on to the Kares Engineering. Kares Engineering made no independent decision to change or alter any specification,” the company said.

KARES said it was paid GYD$662 million and there is an outstanding payment of GYD$66 million. 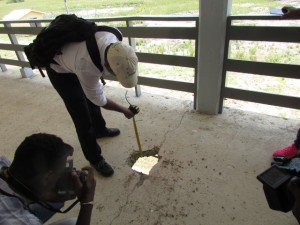 Architect DavendraDoodnauth of Rodrigues Architects Ltd. points out a structural defect during a tour of the Kato Secondary School construction project

Referring to a hole in the structure, KARES suggested that the hole in the corridor was created by the audit team in order to determine the thickness of the concrete.

The company expressed confidence that the school would pass a compression strength test- the standard for concrete testing. “The company is disputing the conflicting Schmidt Hammer readings since both the Ministry of Public Infrastructure and the “independent” contracting firm results show vastly conflicting readings with differences as high as 2,920 PSI. Kares Engineering passed 22out of 24 structural tests conducted by the Ministry of Public Infrastructure, only after this this an “independent” test was ordered.”

According to KARES, the building is still under warranty for termite treatment and will be so for the five years from the date of the contract completion. “The Government has not asked or told the contractor about any termite problem nor have they requested the free remedial measures available to them under the warranty terms.”

Kares Engineering said it has wage sheets to prove that workers at Kato Village were paid an average of GYD$9,000 per day higher than wages paid to similarly unskilled workers in Georgetown.

The engineering company said a a detailed ten-page response was sent to the audit firm but now claimed that KARES did not respond. “The audit company never contacted the company.”