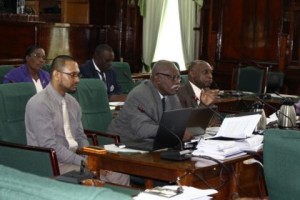 A call for Government to formally pronounce on a proposed travel ban for University of Guyana (UG) loan recipients, who are indebted to Government, will be heeded,  Minister of Citizenship Winston Felix said.

The Government Information Agency (GINA) reported that the request was put to Minister Felix as he appeared before the Parliamentary Sectoral Committee on Foreign Relations, accompanied by Minister of Foreign Affairs Carl Greenidge and technical staffers. The call was made by Head of the Sectoral Committee and Opposition Chief Whip, Gail Teixeira, after media reports about a travel ban that is being proposed for UG students who have failed to pay their debts.

“I have heard that very statement, I have read it in the papers but in terms of execution that statement has not reached me. So I am waiting to see what the Minister really intends when he says so,” Felix said.

For his part, Minister Greenidge said “I am not aware that Cabinet took any decision of banning anyone… but if that is the case none of the Ministers here were responsible for making that statement,” he added.

Among issues raised by the Sectoral Committee’s Chairperson Teixeira was the fact that Government’s Student loans have to be repaid over a number of years. She questioned whether during this period, debtors would be permitted to travel overseas, and how, would the “repayment contracts” be worded to reflect this. She then called on the Government Ministers to seek clarification from Finance Minister, Winston Jordan on this issue.

Ministers Felix and Greenidge both gave their commitments to get a clear answer from the Finance Ministry on the issue.

Jordan announced a number of measures to ensure that those who have been granted loans repay them upon completion of their programme, in keeping with the terms and conditions of their contracts. These include new requirements for borrowers who wish to switch from one programme to the other. “Such borrowers must first pay off the full sum of all outstanding loans before accessing a new loan,” Jordan said.

The proposed travel restrictions were put forward by Minister Jordan, at the unveiling of the new $26.5 million Student Loan Agency building at the University’s Turkeyen Campus. The Minister said that loans will only now be given to Guyanese students who have been residing in Guyana for 180 days continuously and these borrowers must be owners of a valid Guyanese passport.

Jordan explained, “While the Cabinet did not agree or had a proposal put about stamping passports, all information on recalcitrant borrowers will eventually be put at all immigration points and we will set up a desk at the same time for those who would be stopped from travelling to make the necessary arrangement for payment of the loan or debt prior to departure.”

An audit, conducted by accounting firm HLB, R. Seebarran and Co, revealed that the delinquency rate in repayments was 70 percent which amounted to several billions of dollars for the period December, 2011 to May, 2015.