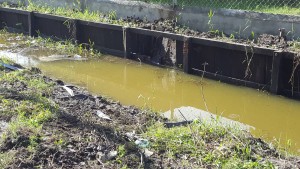 The woman, who drove up a one way and struck down three St. Lucian scouts who are here for a Caribbean Cuboree, was Thursday fined and jailed for 10 months.

Magistrate Renita Singh at Court seven of the Georgetown Magistrates’ Court sentenced Fordyce to 10 months imprisonment for the dangerous driving charge and fined her GYD$15,000 for breach of a one-way.

Investigations revealed that the driver parked her vehicle in front of the North Georgetown Primary School, in Woolford Avenue, went into the school to do registration but was refused entry because of her mode of dress. As a result she became annoyed and drove out of the Avenue, in the process the vehicle struck down the two children.

Joseph’s condition is said to be serious.

Meanwhile, the St Lucia Times on Thursday reported that St. Lucia’s National Scout Commissioner, Robert Augustin, has been reassuring parents here whose children are attending the Caribbean Cuboree event in Guyana, after a mishap that injured Saint Lucian participants.

“I just want to assure the parents of the other Cubs that everyone else is safe,” Augustin said.

Saint Lucia’s National Scout Commissioner, Robert Augustin, told the Times that the minor case was treated and released, while the other injured boy was kept in hospital for further treatment.

He said the parents of the affected youngsters have been kept informed, while the parent of the boy who was seriously injured left for Guyana yesterday on an early flight.

“All of the participants at the camp are safe and not directly affected by the incident because not everybody was there,” Augustin disclosed.

He said he has been in touch with at least one Doctor in Guyana.

Saint Lucia has a contingent of fifteen participants at the Caribbean Cuboree in Guyana  being held from July 24 -29, 2016.

The contingent consists of four leaders and eleven Cubs.