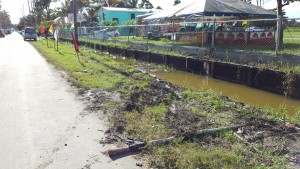 Three visiting cub scouts from St Lucia, who are here for the Caribbean Jamboree (Cuboree), were struck down and injured Tuesday outside the Scout Association of Guyana headquarters on Woolford Avenue, Georgetown.

An official of the Scout Association of Guyana told Demerara Waves Online News that since the incident a section of that road has been cordoned off to vehicular traffic. A formal request for the cordon during the planning stages for the Cuboree had been denied.

Police confirmed that a woman drove up the one way in car PSS 1236 shortly after an altercation with a guard at the nearby North Georgetown Primary School about her mode of dress on arrival to register a student.  The woman has been arrested as part of the probe into the incident.

Injured are eight year old Nick Omari Joseph and nine year old Darnell Matthews. Joseph and an unnamed female scout leader sustained bruises while Matthew’s condition is listed as serious due to spinal and head injuries because the car pinned him down in a gutter.

Demerara Waves Online News was reliably informed that efforts are being made to fly in the parents of the child who is more seriously injured. 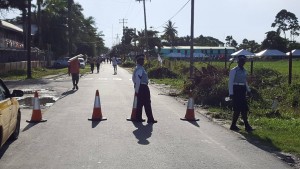 A section of Woolford Avenue was cordoned off by police only after the accident, a Scout Association of Guyana official said.

Counselors from the Ministry of Social Protection quickly rushed down to the Scout Headquarters and counseled the other cub scouts who were traumatized by the incident. “When the incident happened everybody was traumatized. The good thing is that the government has supported us and they have sent it a lot of counselors.  Some of them (children) are so scared and trauamtised that they don’t even want to leave the classroom and go and shower – that is how much they are scared,” Camp Chief of the Cuboree, Zaida Joaquin told Demerara Waves Online News.

Joaquin recalled that despite repeated requests by the police to prohibit vehicular traffic before and during the Cuboree, they have been ignored. “Every day I have been asking them and they are telling me it is not their job.  I have it in writing where I asked them to block the street between the two schools and they said they couldn’t,” she said.

The Scout Association of Guyana official said since the incident “we have tons of police here and it is so tight now that even our own staff is not getting to come in. Why should something happen before we put things in place.”

She also seized the opportunity to express concern about discourteous motorists who bolted through the 800-member parade of local and visiting scouts from across the Caribbean. “I am asking the Guyanese public to respect each other. This is a parade of other countries. It’s making Guyana looking bad, not just Scout Association.”