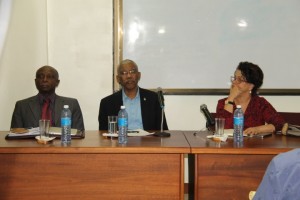 President David Granger agrees that Guyanese should use more cassava and other gluten-free flours because they are healthier but he forecasts that his administration will face political resistance if there is no broad agreement.

“I think at this stage we probably need to develop a more consensual approach,” he said during an interactive session with Guyana’s newly appointed ambassadors at the end of their one-week orientation workshop.

Granger was at the time responding to a suggestion by Ambassador to Geneva, Dr. John ‘Deep’ Forde-who is a former Caribbean Representative for the Food and Agricultural Organisation (FAO)- that there should be an Integrated Economic Policy involving the public and private sectors in the use of domestic commodities such as cassava flour.

The President suggested that for the use of sweet potato and cassava flour to become a firmly held belief in Guyana’s public sector perhaps they should be widely used in hospitals, the Guyana Defence Force and the  Guyana Prison Service.

Back in the 1980s, wheaten flour, split peas, onions, garlic, milk, sardines, corned beef and other food items had been banned by the then People’s National Congress (PNC)-led administration of then President Forbes Burnham. The government then had promoted the use of locally produced substitutes including cassava, rice, plantain and corn flours.

Granger is also the leader of the PNC-Reform which was also responsible for the return of most of those previously banned or restricted items after Burnham died in 1985 and his successor, Hugh Desmond Hoyte, abandoned the socialist experiment and embraced a market economy system.

Reflecting on that period, President Granger said it had become a political football. “You’re right! People are moving away from gluten, they want healthy foods and this is a policy we pushed very forcefully but the government of the day was resisted and it did become a political issue to use rice flour, cassava flour.”

Foreign Affairs Minister Carl Greenidge added that part of the challenge was that people had very strong views about things. “Sometimes those views are actually ill-informed if not ignorant. The idea, for example, that there is something called let’s say dahl , it’s made in this way and any variation from this way is a threat either by religious or ethnic..” Greenidge said a national plan would be crafted this year and it should be supported by Development Support Communication. “There is some promotional and awareness raising so that people move away from these intolerant and ignorant by and large positions either what is desirable or what is the product,” he said. He noted that in India and other countries there are several types of flour other than wheaten flour and dahl other than those made from split peas.

The then opposition People’s Progressive Party (PPP) had capitalized on the food bans and restrictions by reinforcing to, among others, its mainly East Indian support base that the PNC was  depriving it of roti and dahl.

Ironically, up to May 2015 when the PPP-Civic lost the elections, then Agriculture Minister Dr. Leslie Ramsammy had been considering various initiatives to increase the production and consumption of cassava flour as part of a Caribbean Community (Caricom) food security initiative.

Noting that he recently appealed to farmers at Parika to sell more of their sweet potatoes to fast food restaurants, President Granger said greater efforts must be made to increase the consumption of locally produced food.

“I don’t think we are doing enough but more can be done that in that regard but in order to push it in the private sector and – there will be political resistance as well- but this something we can overcome but I agree with you more could be done,” he said. He added that there was no mechanism in place for Dr. Forde’s suggested integrated economic approach. 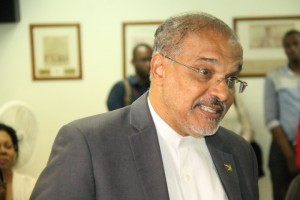 “The emphasis here for me and the point I am trying to make is  the public policy leadership that says every prison, every hospital, every school must be using bread that is forty percent cassava, must be utilizing our domestic commodities,” said Forde.

He highlighted the importance of government telling large investors coming to Guyana that they must be committed to a socio-economic cohesion policy that is geared to bringing Guyanese out of poverty and spreading the wealth across the nation.