A lifetime chance for Guyanese youths to learn robotics 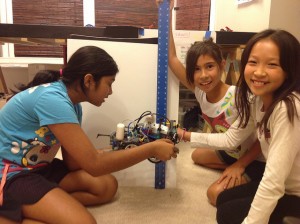 Guyanese youths will have a chance on Thursday to learn how to make robots as part of a larger push to cultivate their interest in Science, Technology, Engineering and Mathematics (STEM).

For more information, e-mail [email protected] or see their website at http://stemguyana.com. The team can also be reached by WhatsApp at 770-402- 5857.

The sibling team of Ima, Asha, Caleb and Joshua Christian, although US-born, have spent many summers in Guyana, attended summer enrichment programs in Guyana, and are directly connected to Guyana through their involved parents, former National Team Basketball players Karen Abrams and Leon Christian.

Since emigrating, the parent Christians have never allowed distance to hamper their contributions to Guyana, whether through representing the country in several Caribbean basketball championships, investing in a local business, contributing to local civic efforts, or now inspiring their children to share their technology knowledge with local students in Guyana. The husband and wife team feel a strong sense of duty to contribute to the development of Guyana. 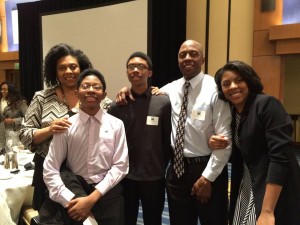 The Christian family at awards banquet sponsored by Women In Technology where Asha was honoured for her contributions to technology.

Karen Abrams said, “After Ima and Asha expressed their interest in a technology camp in Guyana, I shared the idea with the First Lady Sandra Granger during her 2015 trip to Georgia, USA. She immediately loved the idea, and responded that we should contact her again as we got closer to the camp date. As we approached Summer 2016, the First Lady reached out to ask for an update. I was amazed at her enthusiasm and willingness to help; her outreach sealed the deal. I then called up my childhood friend, Chair of the Mathematics Department at Medgar Evers College, Dr Terrence Blackman, and told him about the proposed program. He had already been a part of a planning committee for a maths camp at Queens College, so he suggested that we join forces, and we did. Another call to a generous benefactor, and all of the locations were organized. We have been extremely lucky to have received the overwhelming support that we did. For that we are grateful.”

Since both Leon and Karen worked in the technology industry in the United States, all four Christian children were exposed to technology like Lego Robotics building and while very young. In addition, they were exposed to MIT Scratch Programming as youngsters, and were always encouraged to pursue advanced Math and Science classes in school.

That background paid off when they used their technical knowledge to Google search their way through the creation of a mobile app called Five-O, which was created to allow citizens to rate, review, and track their interactions with law enforcement officers all across the United States. The team won national and international attention for their work on Five-O, but more importantly, they knew that it was necessary for them to pass on what they had learned along the way.

Ima, who is 18 years old and in her second year as a Stanford University undergraduate, and her 17-year old sibling Asha, who is a MIT Mite alumna, took the lead to design an introductory Lego Robotics curriculum which will focus on careers in technology, how robots are used in the world today, applications of robot technology in Guyanese society, and the fundamentals of building and programming Lego Mindstorm EV3 robots.

“Lego Robotics is quite popular in the United States and across all levels of school from K-12 to University level,” said Ima Christian. “Lego Robotics is a fun and multidisciplinary approach to teaching programming concepts and reinforcing concepts like determination, creativity, innovation and problem solving which young people need to be successful in all industries,” said Caleb Christian.

The team revealed that planning for the camp has been non-stop work, but they are excited and look forward to their interaction with students and adults interested in setting up STEM Clubs in Guyana.

This project would not have been possible without the generosity of a group of around fifty supporters from the Diaspora who contributed nearly US$8,000 to purchase robots and supplies for the camp.

Many individuals and sponsors came forward to support us without hesitating. Some of them reached out to contact us to offer their support. The local companies, Noble House Seafoods, Backyard Barbecue and Grill, Church’s Guyana, Bruster’s Guyana, Metro Office and Computer Supplies, Nigel Hughes, R&S Fishing, Lusignan-Good Hope Learning Center, Friendship Primary School and Herdmanston Lodge were the local organizations that pitched in without hesitation.

Additionally, representatives from the Ministry of Education and the Telecommunications Ministry have been helpful.

Specifically, the Director of Sports, Mr Christoper Jones, and the Minister of  Education, Honorable Rupert Roopnarine have both expressed support for our project,” said Karen Abrams. Overall, some key local officials have been supportive.

In the Diaspora, Caribbean International Shipping of Lithonia, Georgia, and the New York-based non-profit organization Guyana Action Committee were also extremely generous with their support.