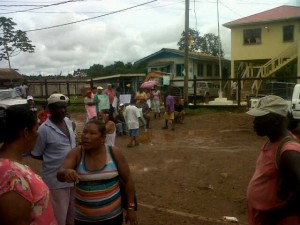 After a second straight day of protest by residents of Port Kaituma against deplorable roads and deteriorated local governance,  government has reportedly pledged GYD$7 million to fix the major thoroughfares.

Executive Officer of Region One-(Barima Waini)-Leslie Wilburg told Demerara Waves Online News that he was unaware of the financing that has been reportedly pledged by Minister of Communities, Ronald Bulkan.

Wilburg said major repairs would not be possible until the rainy season ends. “I don’t think anything can be done now because of the weather,” he said.

Bulkan could not be reached for comment, but a usually reliable source said he communicated his offer to one of the community leaders at Port Kaituma.

Residents on Wednesday again blocked one of the roads with beverage cases and tyres to highlight its very poor condition and later protested outside the Neighbourhood Democratic Council to press their demands for the resignation of the Overseer. They alleged that the Overseer was not using the resources properly and was not working. 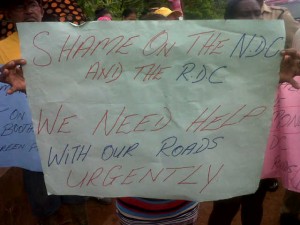 When the residents resumed protest on the Citrus Grove “Floor Road,” they outnumbered the police who tried desperately to persuade them to stop blocking the road. Placards read, among other slogans, “New government, new road, new overseer,” “Shame on the NDC (Neighbourhood Democratic Council) and RDC (Regional Democratic Council). We need help with our roads urgently” and “Overseer must spend the toll money on our roads, not on name brand boots and touch-screen phones.”

Sources said the protest was called off only after the Minister of Communities committed to spend GYD$7 million on urgent repairs.

The REO said he would be meeting residents next Tuesday to address residents’ concerns about claims of poor governance by the NDC.

2016-07-06
Denis Chabrol
Previous: Old Age Pension only for Guyanese residing in Guyana, govt says that’s the law!
Next: Guyana’s manufacturers want Caricom tax waiver on inputs or they may “grind to a halt”