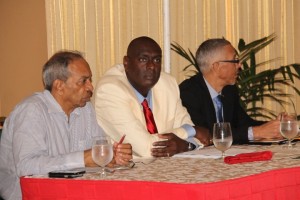 As the Guyana Revenue Authority (GRA) moves to rake in much needed revenue, manufacturing companies are being told that they must pay duties on raw materials for which waivers had been previously granted.

President of the Guyana Manufacturers Association (GMSA), Eon Caesar said the GRA’s strict adherence to the rules had resulted in the two-week closure of Denmor Garment Company which merely imports textiles for the manufacture of garments for export. The containers of textiles had been sitting on the wharf until the GMSA had intervened to have the supplies cleared.

“We have other manufacturers who almost came to a grinding halt because their containers with palm oil, turmeric and other items were on the wharf sitting for a while,” he said.

Caesar said in order to prevent a collapse of the manufacturing sector, companies have been relying on discretionary waiver by the Minister of Finance, Winston Jordan.

The GMSA President explained that the long-term solution lies in manufacturers lobbying  Guyana’s Ministry of Foreign Affairs and Foreign Trade to have the Caribbean Community’s (Caricom) ministerial Council for Trade and Economic Development (COTED) revise the list of products that Guyana would like to have a waiver of the Common External Tariff (CET) on. “The general consensus by all parties involved is that this list needed to be revised a long time ago but it has not been revised,” he told Demerara Waves Online News.

One key concern by the GMSA is the lack of advance notice prior to the imposition of the duties on the raw material inputs from April 1, 2016. The GMSA boss fears that this move would push up prices for locally made items and at the same time result in increased demand for cheaper foreign products. “If we (Guyana) go and apply the duties and taxes, it will obviously carry up the price of the product which would affect consumer and what it would affect consumers and what it would do is that it would force the consumer to buy an imported product than a local product,” he said.

The CET was designed by Caricom to protect domestic manufacturers from unfair competition by cheaper products from outside the region once a member state has the ability to satisfy the demand. The aim was also to assist Caricom producers to grow. In some cases, individual member states have applied to COTED for waivers if their demand is higher than the quantity that is being produced in Caricom or the price is uncompetitive.

In the case of Guyana, Caesar explained that Guyanese manufacturers have for some time now been importing items on the CET non-exemption list without paying duties “because they have been coming in solely for the purpose of manufacturing; they are coming in as raw materials.”  He noted that a number of investors have been guaranteed duty free imports in their investment agreements.  There is some degree of uncertainty about why the duties on raw materials have been waived in the past to help stimulate local production.

For the time being until COTED removes the items from the non-exempt list, the GRA said it would continue to accept waivers from the Ministry of Finance. The GMSA President credited the GRA with being “most helpful” in bringing relief to manufacturers.

Meanwhile, Opposition Leader, Bharrat Jagdeo, claiming that the Guyana government has “gone completely insane”, charged that government’s decision was aimed at boosting revenue collection at the expense of the manufacturing sector. “This is a desperate measure to bolster dwindling tax revenue. Rather than address the core reasons for the revenue shortfall which is the precipitous drop in economic activities in the country and the ineptitude in defining a way forward, the government has resorted to targeting the productive sectors of our economy,” said Jagdeo, a former Finance Minister.

The Russian-trained economist predicted that the imposition of taxes and duties on manufacturing inputs would “have dire consequences for those companies and may result in the closure of some of them and the loss of thousands of jobs.” “I call on the government to immediately reverse this anti-manufacturing policy.”