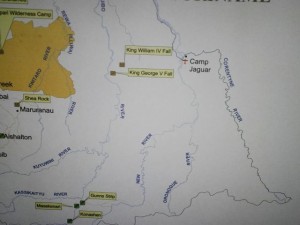 The New River Triangle in south-eastern Guyana which is the subject of a border dispute with Suriname.

President David Granger  and Suriname’s President, Desi Bouterse are due to discuss the Guyana-Suriname border dispute over the New River Triangle when they meet Friday in Paramaribo.

“The Guyana/Suriname Border issue is also expected to be on the agenda. The Head of State noted that he expects that the meeting will see some modalities being established so that the two countries can move forward,” the Ministry of the Presidency said in announcing Granger’s visit.

He would be accompanied by Foreign Affairs Minister, Carl Greenidge.

The Ministry of the Presidency said the “brief meeting” is expected to focus on continental, regional and bilateral issues, which are relevant to both countries.

In an invited comment, President Granger said that the meeting is a brief encounter between the only two Caribbean Community (CARICOM) countries and will focus on bilateral and regional relations.

“We will be having discussions on issues at three levels; one is the fact that Guyana and Suriname are both members of the [Union of South American States] (UNASUR) so we are looking at it from that perspective. Secondly, we are looking at our relations from a CARICOM perspective because both of us are members of CARICOM and third, we are looking at relations at a bilateral level. So it is a brief meeting but we want to cover some ground at those levels before the CARICOM Heads of Government Summit,” President Granger said.

Guyana and Suriname have shared bilateral ties since the Dutch territory became independent in November 1975.

Back in October, 2015, President Granger had called on Suriname to hand over its documents to Guyana for scrutiny in the same manner that Guyana has already done. Granger has said that Suriname should ask the Netherlands Government to open the relevant Dutch Archives to facilitate research by both sides.

The Guyanese leader has also called on Suriname to take the border dispute to an internationally recognised adjudicatory body if it is convinced that its claim can withstand legal scrutiny. “Guyana is of the view that, if an agreement cannot be reached at the bilateral level within a given time-frame, the matter should be taken to adjudication so that this controversy can be concluded,” he has told Guyana’s Parliament.

Based on Suriname’s interpretation of the origin of the Corentyne River, that former Dutch colony is claiming the New River Triangle whose area is about 3,000 square miles or 15,600 square kilometers.