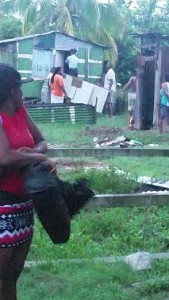 The dwelling at Crane, West Coast Demerara where a man chopped to death his wife and baby, and also severely injured his mother.

A man chopped off his mother’s hand and hacked to death his wife and their baby early Friday morning at Crane Village, West Coast Demerara, police confirmed.

He also chopped off his mother’s hand and she was rushed to the West Demerara Hospital where she underwent emergency surgery.

The assailant was later shot and arrested.

His wife’s name has been given as Vanessa and his mother’s as Jennifer.

Police and angry villagers were hunting for the perpetrator.

Sources said that at about 4:30 AM Suresh called his mother, who lives nearby, to bring him breakfast. On her arrival, he whipped out a cutlass and chopped his mother’s hand.

He then turned the deadly weapon on his wife and two-year old child, killing them almost instantly.

It is believed that Suresh, who is heavy drinker, might have been frustrated by financial problems.