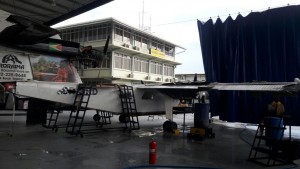 One person was Monday afternoon burnt during an explosion aboard a Britten Norman Trislander aircraft at the Ogle International Airport.

A senior official of Roraima Airways confirmed that one person sustained second degree burns and a broken limb during a routine inspection of one of the aircraft. He has been identified as Maintenance Engineer, Anil Rampersaud.

Officials of the Guyana Civil Aviation Authority were on the spot conducting investigations.

Roraima Airways regrets to inform that there was an incident at our Hangar at Eugene F. Correia International Airport earlier today.

The affected Britten Norman Trislander aircraft was on the ground in the hangar, undergoing a routine maintenance inspection at the time and suffered damage to the right wing.

Regrettably, one of our Engineers suffered burns to his hand and fractured his ankle. He is currently stable and resting in hospital. Roraima Airways will do all in its power to ensure he is comfortable and receives the best medical care. Please join with us in praying for his speedy and complete recovery.

An investigation to determine the exact circumstances surrounding the incident is currently underway by both our Maintenance Quality Department and the Guyana Civil Aviation Authority.

We wish to praise the heroic efforts of our staff who responded aggressively as trained, using the fire-fighting equipment in the Hangar, negating any further injury or damage.

We are currently arranging counselling for the maintenance team and all team members affected.

While the temporary inability to use the aircraft is difficult for us, our flight operations will suffer no significant disruption.

Previous: Anglican Diocese of Guyana to decide on female priests; same-sex marriages not on agenda
Next: Man jailed for causing death of Nigel Hughes’ mother