Anglican Diocese of Guyana to decide on female priests; same-sex marriages not on agenda 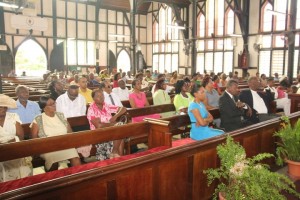 Congregants at the opening ceremony of the 145th Session of Synod for the Diocese of Guyana at St. George’s Cathedral, Company Path, Georgetown.

The Anglican Church in the Guianas is this week set to decide whether whether women should be ordained priests, but Bishop Charles Davidson deflected questions about whether the church should allow same-sex marriages.

Davidson said delegates would vote on the matter of women priests at the 145th Session of the Synod  for the Diocese of Guyana which includes Suriname and French Guiana. “It has been on the agenda for the last two or three years. I am just making sure that we take it of the agenda,” he told Demerara Waves Online News.

Reverend Davidson said it was not so much whether he would prefer to see women ordained to the priesthood, but what God is “saying to us at this particular time.” “I have worked with female priests for the last twenty years so I have no issues with working with anybody who will do God’s work,” he said.

He said traditionalists- those who believe that a woman’s place in the home- would have to “agree to disagree” with those who would like to see women priests.  “God calls all of us and empowers all of us and at some point in the life of the church our eyes are opened and we recognise that there is something we weren’t doing that we should be doing and because people are accustomed to tradition, it tends to cause uneasiness but trust God and decisions that we make prayerfully and studied, God is always with us,” he said.

The Anglican Bishop said the matter of same-sex marriages was not on the agenda of the 145th Session of the  Synod,  and shied away from sharing his views on whether the church should allow such. “I don’t think we are at the stage where we are going to make any kind of announcement at all in terms where we stand about same-sex marriage and all of that, not this time,” he said.

“I have no public views, I have private views,” he added.

Asked whether he would like to see the matter of same-sex marriage be put on the church’s agenda at any point in time, he said “no, no.”  “It has nothing to do with liberalism; it has to do with how God is revealing himself to us in the church and how we are responding to how God is revealing himself.” He declined to say whether he believed that  having same-sex marriages would grieve the Holy Spirit, he said “I am not going to answer that.”

The Anglican Bishop said the Synod  would also examine ways in which the church could help the poor and needy, how church members could use their gifts inside and outside the church and mentor young men and boys to take their place in society. “We are hoping to change the public face of our church in a kind of a way that will allow people to want to become members of our church and that happens when our members are more involved, they are willing to invite people to be part of our church,” he added.