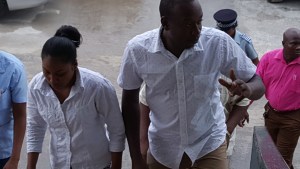 A 21-year old mother of two young children on Monday pleaded guilty to trafficking in cocaine, while seeking to shield her husband from blame.

He was remanded to prison until July 25, 2016, despite a strong request for bail by their lawyer.

Angelica Forde has to return to court on Tuesday for sentencing after a certificate of value of the cocaine is submitted to the court.

In a move aimed at exonerating her husband, James Forde, she told the court that “I am really sorry. It’s my stuff. No one else was involved.”

Defence Lawyer, Lloyd Conway told the court that Angelica was remorseful, did not waste the court’s time,she has eight CXC subjects, is the mother of two children- one year and three years old- and if she is given a reasonable sentence  she could return to society.

Angelica was caught on May 15, 2016 by CANU agents while she was an outgoing passengee at the Eugene F. Correia (formerly Ogle) International Airport. She was on her way to Barbados and then to the United States.

The CANU prosecutor told the court that an anti-drug agent saw the woman’s apparel fitting her in an unusual manner.
She was taken to a search room where it was found that she had strapped to her body a black body strap beneath which were some packets containing a white substance suspected to be cocaine.

With regards to James Forde, the defence lawyer said he is a taxi driver, a father of two, has been living at 100 B Mora Street, Vryheid’s Lust, East Coast Demerara, and that his wife said he had nothing to do with her possession of the cocaine for the purpose of trafficking.