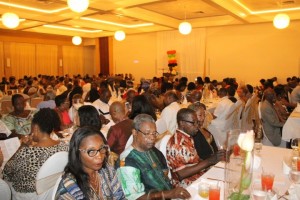 A section of the attendees at the African Guyanese Awards Ceremony that was held on Monday, May 24, 2016 at the Pegasus Hotel.

Vice President and Minister of Foreign Affairs, Carl Greenidge Monday night called on Afro-Guyanese to take advantage of education as a means of improving their quality of life and social and economic advancement.

“It is important that we find a means of ensuring that the current generation can also value education, recognise the role of education in social mobility,” he said in an address at an African Guyanese Awards Ceremony to mark the United Nations-designated Decade for People of African Descent at the Pegasus Hotel. Greenidge stressed that education was key to moving many Afro-Guyanese from working class, semi-skilled and unskilled backgrounds to the professions. “We have to encourage the institutions that imbue in our children the value and importance of education,” he said, adding that such education must go beyond that of yesteryear  and focus on technological advancements, understand and solve problems. He singled out Afro-Guyanese contributions to the bauxite, sugar, rice and other industries after they had been educated.

Greenidge, who is a prominent member of the Afro-Guyanese dominated People’s National Congress Reform (PNCR), credited that segment of the population with significant contributions to the development of the public sector, education and security. “There is no where…that this community has not left its mark in relation to the volume and the quality of its service, a quality which enables us to stand proudly anywhere in the world,” he said.

The awardees were selected by the African Guyanese Committee whose representatives were drawn from, among others, the Pan African Movement, Cuffy250 Organisation, Women’s Roundtable, Miss Emancipation Committee.

Greenidge referred to findings that people of African descent globally still have limited access to quality education, health services, housing and social security and in many cases their situation remains largely invisible and insufficient recognition and respect have been given to them to seek redress for their present condition. They also face discrimination in access to justice and police brutality.

The Foreign Minister recommended that social groups, churches and other institutions be used as vehicles to promote education and entrepreneurship. “Those are institutions that we have either to refashion or to reproduce to achieve the goals that we set for ourselves,” he said.