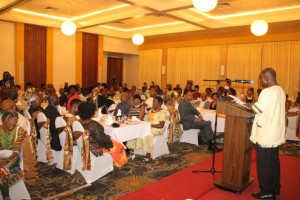 He recalled that the PPP had in the past criticized People’s National Congress (PNC)-led governments of engaging in racism on the basis that recipients were mainly one section of the Guyanese population.  Describing such a posture as an “absurdity,” he reasoned that because the bulk of Guyana’s public service and the Guyana Defence Force are from one group it is expected that the awardees would reflect the make-up of those institutions.  “The problem lies in not giving national awards to those who have contributed but in having some of our political and communal bodies disparage and misrepresent important pillars of our society; that’s where the problem lies,” Greenidge told an African Guyanese Awards Ceremony to mark the United Nations-designated Decade for People of African Descent.

The Foreign Minister believed that the PPP-led administration, while in office from 1992 to 2015, avoided the granting of National Awards because of racial considerations. “We, as Africans, that have contributed to the building of this country, that have been the backbone of public service or civil service, public policy making, have to understand  that that is an effort to denigrate, disparage and undervalue or devalue the contributions that we have made to this country,” he said.

He cautioned that such devaluation could redefine how current and future generations of African Guyanese perceive themselves.  Afro-Guyanese were credited by Greenidge in delivering quality education, policy making, science and technology and the bauxite, sugar and rice industries.

Former President, Donald Ramotar is on record as having expressed concern about whether several of the 52 Guyanese who received National Awards last year `were entitled because many of them are “loyalists” to the PNC.