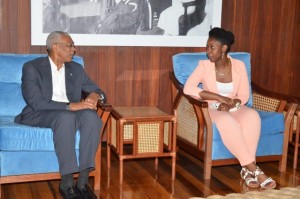 President David Granger and Ms. Kelly Hyles during their discussion at the Ministry of the Presidency.

President David Granger on Monday met with Ms. Kelly Hyles, the 17-year-old Guyanese girl, who was accepted into 21 colleges across the United States of America, including eight Ivy League universities.

Ms. Hyles was accompanied to the Ministry of the Presidency by her mother, Ms. Anetta Earl, her aunt, Mrs. Shaundelle Inniss-Munroe, her uncle, Mr. Kenneth Earl and social activist, Mr. Mark Benschop.

The President congratulated the young scholar, referring to her as a product of the Guyanese society and a citizen of whom the nation is proud.

“Everything I do, everything the Cabinet and the Government does is so that our young people can have a bright future… This country can only be developed [with] intelligent and educated persons like you. We are happy and encouraged by your achievements,” President Granger was quoted as saying in a Ministry of the Presidency statement.

Ms. Hyles and her mother arrived in Guyana Sunday evening to be part of the 50th Independence Anniversary celebrations. In fact, she will celebrate her 18th birthday on Independence Day.

She was accepted to some of the most distinguished colleges in the US including Harvard, Yale, Princeton, Dartmouth, Cornell, Brown, Columbia and the University of Pennsylvania but has decided on Harvard, where she will be pursuing studies in either Bio-Chemistry or Neuroscience.