More than GYD$1 billion in licence fees paid to the National Frequency Management Unit (NFMU) have been illegally used to help finance the People’s Progressive Party Civic-led administration’s two flagship projects- One Laptop Per Family and E-Government, a special probe has found.

“Apparently, failing to appreciate the precedence of statute over “Government policy”, the management of the NFMU misguidedly continues to justify the statutory violation,” states the special investigation into financial operations and functioning of that regulatory agency.

Conducted by Chartered Accountant and Attorney-at-Law Christopher Ram, the probe found that the NFMU’s revenues, being public monies, should have been paid into the Consolidated Fund but on Cabinet’s directions the NFMU was directed to finance the One Laptop per Family and the E-Government Project from 2010 to May 2015. Over that period, more than GYD$$1.6 billion was paid for administrative expenses of the two projects, representing 84% of the Unit’s revenue. 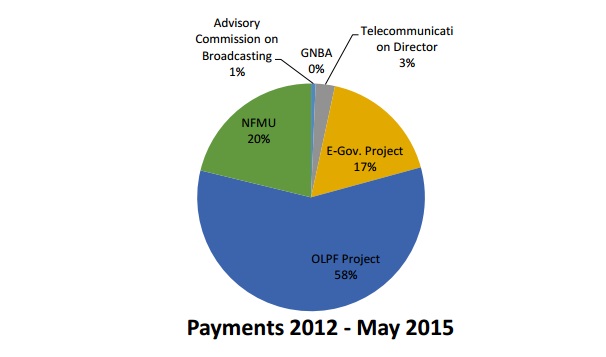 Ram, citing the Public Corporation’s Act, said the NFMU does not have the authority to meet those expenditures and the monies should be repaid. “Total disbursements made to cover operational expenses of the OLPF and E-Gov. projects amounted to $1,029,958,779 and $278,169,461respectively. We recommend that repayment be sought immediately from the relevant agency,” states the report which was posted Friday, May 21, 2016 on the Ministry of Finance’s website.

“Expenditure in connection with these projects has distorted the operating results of the NFMU for the years 2012-2014 because of the significant sums incorrectly included in the expenses of the NFMU,” the report also states.

The Ram-led team of investigators states that “the unlawful practice of expenditure of these entities being included in the Budget of the NFMU has continued in the 2015 Budget.”

The probe found that for accounting purposes, the NFMU treated payments made on behalf of government agencies as expenses of the NFMU. This is clearly incorrect. According to the report, the NFMU apparently owes the Guyana Revenue Authority (GRA) hefty sums in taxes.  “After adding back these expenses which in any case are not allowed for tax purposes, a preliminary calculation suggests that the NFMU has a liability to taxes of more than one billion dollars, not including penalties and interest. We saw no evidence that the Guyana Revenue Authority has made any effort to assess the NFMU to any taxes,” states the report.Ram highlighted that no periodic statements are prepared by the NFMU and communicated to the OLPF or E-Government projects with regard to the expenses paid.