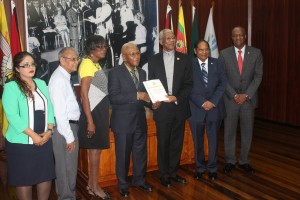 A sound warning was issued to Guyana’s Public Service corps on Friday as President David Granger warned that the Government may be looking to pay public servants according to their work and the manner in which that job is done.

President Granger made the statement while receiving the Report from the Commissioners of the Commission of Inquiry into the public service.

The Commission was convened in August 2015 and was to look at several aspects of the public service including remuneration.

The absence of the final report has stalled negotiations between the Government and Unions over increases for public servants in 2016.

Mr Granger hailed the report as a “landmark study” noting that will pave the way for the future of Guyana’s Public Service.

“We have to move back to a standard by which the performance of individuals is relative to performance and pay,” said the Head of State adding “many people who expect that there is going to be some bonanza will expect that the bonanza will come from their own efforts…If they want to be lazy they will get a lazy persons salary…if they work hard they will be rewarded.”

The report will now be studied by the APNU+AFC Cabinet with copies being disseminated to the Leader of the Opposition, and the relative workers unions.

The President said that after the report is discussed at cabinet the Ministry of Social Protection and Ministry of Finance will take steps to engage the unions on the salary increase for public servants.