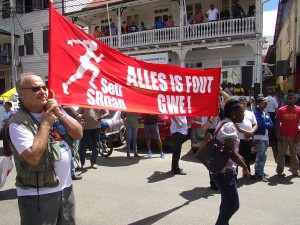 “Everything is wrong. Go Home”, former member of parliament Wim Bakker is saying on his banner during Friday’s rally against the price hike for electricity in Suriname. (photo by Ivan Cairo)

PARAMARIBO, Suriname_ Over five thousand disgruntled citizens took to the street here Friday to protest against a steep price hike for electricity. The move to increase the price came just days after the International Monetary Fund (IMF) advised the Desi Bouterse-administration to cut back on subsidizing the electricity bills.

The government subsidized the national power company annually for over 1 billion Surinamese dollars (US$ 160 mln).The higher rates took effect on May 1 and people would have to pay higher bills starting late June.From the beginning, the opposition, the private sector, trade unions and part of the coalition in parliament were against the increases.

A last ditch effort from president Desi Bouterse Thursday afternoon couldn’t prevent a massive turnout at Friday’s rally. During a radio interview, the President announced that the price increases are being postponed for the time-being. The coming days the government will discuss the matter further with the unions and business sector and also seek advice from the Social and Economic Council, before taking a final decision, Bouterse said.However, the organizers of the protest have refused to call off the rally.

Although the price increase for electricity was the straw that broke the camel’s back citizens also complain about the fact that life has become more expensive since the government devalued the Surinamese dollar in November last year, and prices for all goods and services have risen correspondingly. Several weeks ago president Bouterse said in parliament that the price hike for electricity won’t affect some 75 percent of all households since the government subsidy for this group will continue.

Protesters urged the government not to implement austerity measures backed by the IMF, in fear that the situation in the country will worsen. As a result of the international sharply lower prices for oil and gold, Suriname’s main export products, and alleged wasteful expenditure policy of the government, for over a year there’s a financial and economic crisis in the country.

In late April an IMF team reached a staff-level agreement with the Surinamese authorities on the key elements of an economic program that could be supported by a two-year stand-by arrangement (SBA) in the amount of approximately US$478 million the IMF announced a couple of weeks ago. Subject to the timely completion of prior actions by the Surinamese government and obtaining necessary financing assurances, the IMF’s Executive Board could consider the proposed financing arrangement in early May. It was being expected that the Executive Board would take a decision on Friday May, 13.

According to the IMF the sustained drop in the prices of gold and oil has caused substantial external and fiscal deficits, and international reserves have declined significantly. These negative external developments, combined with the closure of Suralco’s alumina refinery in late 2015, have pushed the economy into a recession.