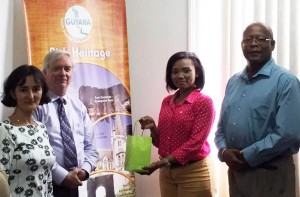 “Minister Hughes and the FCC representatives cited the importance of such capacity building sessions in assisting the government’s efforts to facilitate the development of world class telecommunications legislation and implementing regulations in order to assist in the development of this growing and vitally important sector of Guyana’s economy,” the American embassy said in a statement.

The visit by the FCC officials comes as Guyana prepares to liberalise the telecommunications sector by the passage of new laws.

The FCC representatives praised the government’s efforts to modernize telecommunications infrastructure including its recent decision to allow cellular providers to launch 4G service in advance of Guyana’s 50th anniversary celebrations.

While in Guyana, the FCC officials also had the opportunity to participate in the “Girls in Information Communication Technology” event designed to encourage young women to learn more about information technology.  The FCC representatives highlighted the FCC International Visitors Program and online training as excellent opportunities for young women to become more knowledgeable about, and perhaps pursue careers, in the exciting and constantly changing field of telecommunications.