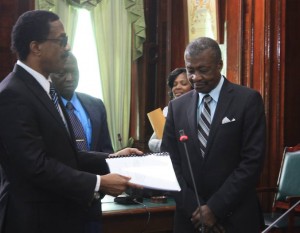 The report being handed over to House Speaker Dr Barton Scotland

Attorney General Basil Williams accompanied by Public Security Minister Khemraj Ramjattan on Wednesday morning presented the Speaker of the National Assembly Dr Barton Scotland with a copy of the Report of the Walter Rodney Commission of Inquiry which would be laid in the House for debate.

This is after the report was presented to the Government in February after close to two years of public hearings on the assassination of the Historian and political figure on June 13, 1980.

Speaking at the handing over, Williams stated that upon receiving the report from the commissioners the president set in train a roadmap which would lead to the report being presented to Parliament.

“We have no difficulty in laying this report over at this time,” said Williams.

The report is being laid over just one day before Opposition Chief Whip Gail Teixeira is supposed to bring a motion to the House for the Government to stop delaying and publicize the report.

“We don’t consider that there was a delay I just indicated to you there was a process,” he emphasized.

The Attorney General pointed out that the manner in which the COI was conducted has led to a “bizarre result.”

“A lot of injustice was done to certain persons who would named during the process and really were not afforded the opportunity during the currency of the inquiry to give evidence,” said Williams.