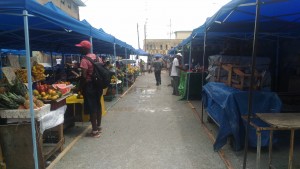 With monthly loans to pay, children to take care of and bills to pay, vendors are still unsatisfied with the arrangements put in place for them at the Parliament View Mall and venting their frustrations.

A handful of vendors turned out to City Hall on Wednesday morning to voice their concerns over the issue.

The vendors claim that they have not been allocated spots at the new location and attempts made to engage the Clerk of Markets on the issue have been dismissed.

After the vendors became loud in the City Hall compound they were asked to leave. They complied and took their protest to Regent Street.

After being able to gain an audience with Town Clerk Royston King the vendors were told that the mall was almost filled with just a few spots remaining.

King said that presently the mall houses 173 persons with over 30 other applications pending. City Hall is hoping to place at least 185 vendors at the new location.

But the Town Clerk pointed out that “new people are coming out” to claim spots at the mall urging that the vendors stand guard.

“The space is limited very limited so what we are trying to do is have am accurate register of people of weren’t there a before,” he said adding “We don’t want to put somebody there who wasn’t there before.”