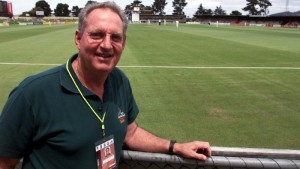 BBC – Legendary West Indian commentator Tony Cozier has died at the age of 75. A familiar and respected voice around the world, the Barbadian will be remembered for a career in TV, radio and journalism spanning 58 years.

Born in Bridgetown in 1940, he made his BBC Test Match Special debut in 1966 and also wrote several books.

“He’s easily the best I’ve come across in 25 years at being able to do both disciplines.”

The son of a journalist, Cozier studied journalism at Carleton University in Ottawa, Canada, and began commentating and writing on West Indian cricket in 1958.

He played hockey as a goalkeeper for Barbados and cricket as an opening batsman and wicketkeeper for two Barbados clubs, Wanderers and Carlton.

But he became a household name through his work with major media organisations throughout the world, including the BBC, Channel Nine and Sky.

In December 2011, he was awarded honorary life membership of the Marylebone Cricket Club for services to the game, and the press box at the Kensington Oval in Barbados is named after him.

2016-05-10
Jomo Paul
Previous: Inspectorate division to be ‘eyes’ of Infrastructure Ministry
Next: Rodney COI report handed over to Speaker