Inspectorate division to be ‘eyes’ of Infrastructure Ministry 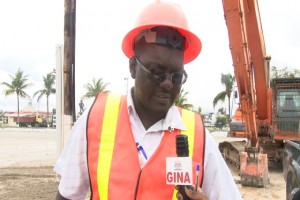 An Inspectorate Division will be established shortly to ensure that citizens benefit from standard infrastructural works. This is in keeping with Government’s plans to restore and repair Guyana’s infrastructure.

Works Services Group (WSG) Coordinator, Geoffrey Vaughn told the Government Information Agency (GINA) that the Inspectorate division will be a part of the Ministry of Public Infrastructure and will function across the country.

The unit, Vaughn said, is basically to “overlook all ongoing works and see that those works have been done to specification and (to) be the eyes of the Ministry.”  This is to ensure that “the government has value for money and taxpayers’ money is spent effectively and efficiently,” Vaughn said.

The establishment of the Inspectorate division will see many persons being employed shortly from various professional fields and those persons will work throughout the 10 administrative regions. According to Vaughn, a number of applicants have already been shortlisted and they would be interviewed shortly.

The division will recruit quantity surveyors, architects, auditors, engineers and project managers among others.

The Ministry of Public Infrastructure has a number of ongoing projects under bridges, roads and sea and river defences. Road works are being carried out in Regions Two, Three and Four and some bridges on the railway embankment are being repaired and replaced with concrete bridges.

Under the sea and river defences project, works are already ongoing in some regions whilst Regions Three and Six will soon see works commence.