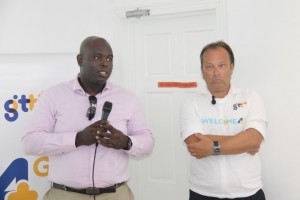 GTT’s Chief Executive Officer, Justin Nedd (left) and the company’s Chief Commercial Officer, Gert Post speaking with the media at the launch of the 4G service.

The Guyana Telephone and Telegraph Company (GTT), which launched its 4G service on Monday, said its pricing plans cater for declining revenue from other services.

The phone company is aware that more people would be using Voice Over Internet Protocol (VOIP) services like WhatsApp, Facetime and Skype to make free calls. “Most definitely that will cannibalise our revenues so that’s why it is very important for us to compensate as quickly with data revenues so I think over the next twelve months we will see our …revenues go down but our data revenues need to go up in order to fulfill all the demands that our customers will have,” Chief Commercial Officer, Gert Post said at the launching of the 4G service at GTT’s flagship store at the Fogarty’s Building.

Post declined to divulge the projected decline in GTT’s earnings because the company is traded on the United States stock exchange.

GTT Chief Executive Officer, Justin Nedd said GTT spent more than US$5 million to kick-start its high-speed mobile data service which would allow Guyanese here to post videos, pictures and other content from Guyana’s Jubilee events in a timely and effective manner. “We have a long-term outlook in terms of where we see Guyana going and that’s why we made the investment,” he added.

In recent years, GTT has been recording declining landline revenues and increasing income from its cellular services, even as it bemoans unfair competition from VOIP providers such as other Internet Service Providers and Internet Cafes.

GTT and its major mobile phone provider, Digicel, source their Internet data independently but do have an interconnection agreement to facilitate calls between the two networks. Six years ago, GTT landed a submarine Guyana’s fibre optic cable at a cost of US$30 million.

The launch of 4G services in Guyana followed approval granted by the Minister of Public Telecommunications, Cathy Hughes for the required spectrum.