Benschop protests as CoI wraps up 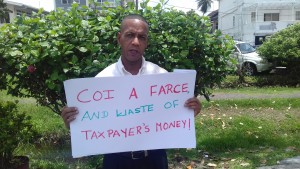 Even as the Commission of Inquiry into the Camp Street Prison Riot concluded on Monday, political activist Mark Benschop was outside protesting the COI, saying that it was nothing more than a farce and waste of taxpayers monies.

Benschop’s complaints comes after he was scheduled to testify at the COI but refused after learning that his testimony would only be taken in camera.

He says that the COI is public and sees no reason why his testimony should be taken privately.

“You can’t have a public inquiry and something as serious as this and then say that you are going to be selective with regards to who testify in camera and who doesn’t. I think it was an insult and obviously suspicious that the Commission decided to have my testimony in camera,” Benschop stated.

The activist, a former political prisoner and treason accused made it clear that he did not request that his testimony be taken in camera nor does he believe it would affect matters of national security interests.

“It doesn’t smell right. Obviously they have something to hide. I want to talk what goes on behind prison walls…I don’t know what could be a threat to national security with someone talking about their experience,” he stated.

Benschop is convinced that the COI is “covering things up.”

Inside the COI, Prison Attorney Selwyn Pieters made his final submission on behalf of the Prison Service. In his statement, Pieters lobbied for the Commissioners to recommend a new prison be built since the existing structure are mere “relics.”

Pieters expressed some concern that a work on a brick prison at the Camp Street Compound commenced before the Guyana Marriott was conceptualized, noting that the Hotel now stands several stories high but the structure at the prison remains incomplete.

He said that it is also important for Prison officers to be properly remunerated.