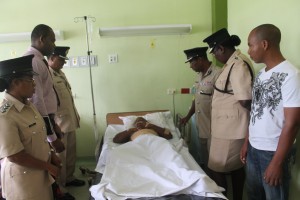 Assistant Commissioner “Administration” Mr. David Ramnarine, DSM, and other senior officers of the Guyana Police Force visited the injured Police Lance Corporal, Andrew Richardson at the hospital, where they offered him words of comfort and encouragement.
Lance Corporal Andrew Richardson was shot and injured in an armed confrontation during a robbery at the Princess Hotel early Friday morning.

Investigators have made a significant breakthrough in the robbery committed at the Ramada Princess Hotel early Friday morning, resulting in the arrest of a security guard and the search for five other persons, sources said.

Police held the security guard who has since admitted to having been involved in planning the robbery with other accomplices in Georgetown.

The guard’s arrest has brought to two the number of persons who have been held so far, the first having been caught in a maintenance room at the hotel shortly after the heist of an undisclosed sum of cash.

From all accounts the security guard and his accomplices had conducted surveillance around the hotel and decided that scaling a fence down the dam was the best option to gain uninhibited entry to the hotel.

After shooting five persons, including a policeman, three of them fled the hotel and escaped in a car that was hijacked from its owner who lives in Buxton.

Those injured are Eon Garraway, James Gregory, Orlando Knights and Udairan Sookraj and Police Lance Corporal Andrew Richardson. The policeman was shot in his abdomen.