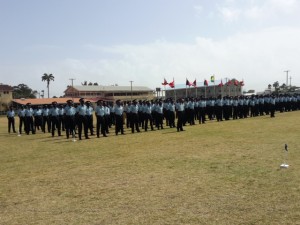 Two of Guyana’s leading Chambers of Commerce in Berbice and police are at odds over the state of crime mainly in the Berbice area where there have been several armed robberies.

While the Guyana Police Force (GPF) did not respond specifically to the concerns by the Central Corentyne and Berbice Chambers of Commerce, the Police Association issued a statement through the law enforcement agency’s Public Relations Department, showing statistics that there has been a reduction in violent crimes.

Declaring that the members of the Central Corentyne and Berbice Chambers of Commerce are an “ungrateful and irresponsible body,” the Police Association urged those two business organisations not to implicate the police force in politically-motivated actions. “The Guyana Police Association is calling on the Central Corentyne and Berbice Chambers of Commerce not to drag the Guyana Police Force into any political conflict, but to seek to give the Force meaningful support in its continuing efforts in the carrying out of its mandate to maintain public safety and security,” the association said.

The Association further charged that that while other civil society and private sector organisations have contributed towards and social and security arrangements, the Central Corentyne and Berbice Chambers have contributed nothing during the past five years.

In apparent reaction to the chambers’ desire for police to use more force against criminals, the Police Association said the “highly motivated” and “professional” police force does not shoot criminals willy-nilly. “Our members see their role in tackling crime as an effort towards crime prevention and the detection of crime as well as the prosecution of criminals in a more efficient way. Our job is not to shoot down people but we are trained to defend ourselves by using force that is necessary.”

The  Chambers, which represent the business community in the opposition People’s Progressive Party Civic (PPPC) stronghold of mainly East Berbice, have attacked Public Security Minister Khemraj Ramjattan and the A Partnership for National Unity+ Alliance For Change (APNU+AFC) government for being unresponsive. “The Government’s policy on crime needs a serious overhaul. The government appears weak, soft and sympathetic to criminals, contrast this with the late Presidents’ Hoyte’s no-nonsense and aggressive approach to the ‘kick down the door bandits” in the eighties, President Granger being a historian should go back and study and implement the strategies used by President Hoyte, who on assuming office in the eighties quickly brought the crime spree under control,” the chambers said in a statement.

The Chambers said President David Granger and his government have failed to provide safety and security to all Guyanese. The business organisations recommended that the commissioner, divisional commanders and their deputies urgently put strategies in place and monitor every single police station and outpost in the country to ensure that preventative strategies are put in place, and intelligence is gathered and acted upon.

Registering their extreme disappointment that the coalition has failed to fulfill its campaign promise of improving Guyana’s security landscape with the military, ex-commissioner and other “experts” at their disposal, the Chambers said Berbice is far worse than we have ever experienced. “Everyone seems to be a sitting duck, as it seems every day a business is held up and residents beaten and robbed in their homes, this coupled with the depressed business environment, makes it exceedingly burdensome for businesses and ordinary citizens to cope.” They also expressed concern that Public Security Minister, Khemraj Ramjattan has refused to meet with them immediately because he is busy with preparations for Guyana’s 50th Independence Anniversary.

Similar concerns were expressed by the Georgetown Chamber of Commerce and Industry (GCCI) which called on government and the Disciplined Services to address the crime situation ahead of the arrival of overseas visitors for the Jubilee celebration. “It is extremely disturbing that all the support over the years, from both local and international agencies, seems to have done very little to improve the overall effectiveness of the Guyana Police Force in securing the nation.  Clearly, there is an urgent need for a national discussion on the long term capacity of the Force to address the level of crime in Guyana, starting with an increase in foot patrols,” the GCCI said.

The GCCI noted that the business climate could be affected by robberies such as those committed on the Princess Casino, the murder of the two prominent rice farmers- both burnt to death-and numerous other businesses across the country that continue to be documented in our daily newspapers which are regularly viewed by Guyana’s intended overseas guests . “These incidents will loom like a large cloud over our parades and related activities, deter visitors from coming to participate in our celebrations, and can place a damper on lucrative future investment.