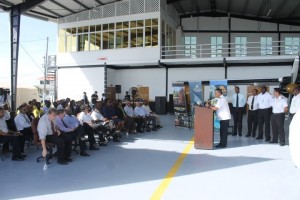 Chief Executive Officer of Roraima Airways, Capt. Gerry Gouveia addressing the gathering at the commissioning of the Britten-NormanTrislander and plane and the company’s Approved Maintenance Organisation.

Veteran pilot, Captain Gerry Gouveia hailed Guyana’s record of aviation safety despite the “very, very rough and hostile” terrain and number of daily flights in and out of the country.

“This is aviation is one of the safest in the world and I would say one of the safest aviation industries in the Caribbean based on where we operate,” he said in an address at the commissioning of Roraima Airways’ first of five Britten-Norman Trislanders and the official opening of its Guyana Civil Aviation Authority (GCAA)-approved Aircraft Maintenance Organisation (AMO).

Gouveia said that while an occasional accident might lead to wrong perceptions, the statistics show that Guyana’s aviation sector is among the safest in the word. He said consideration must be given to the number of passengers and daily and annual flying hours that must be correlated with the accidents and the environment in which the country’s pilots and engineers operate.

The former Guyana Defence Force (GDF) pilot reminded that most of the country’s airstrips are made of dirt and there are high mountains and tall trees in many locations.

In the past, Gouveia has expressed grave concern about Guyana’s poor search and rescue system to  respond effectively to air crashes in Guyana’s densely forested interior.

Junior Minister of Public Infrastructure, Annette Ferguson acknowledged the unsafe condition of many airstrips in the interior but assured that every effort was being made to fix them. “We will be working to ensure that our airstrips are properly developed because, based on the observation that we have, many of the airstrips are not asphalted , some are made out of sand so when  you have to land, God really got to be with you especially those who reside at Kaikan,” said Ferguson who is responsible for the aviation sector.

While Gouveia credited Caribbean Aviation Maintenance Systems (CAMS) for a wonderful and professional job in maintaining Roraima’s aircraft, he said the company needs more independence and flexibility in keeping with its growth. “The fact that we spend so much of our time in the skies at night doing medical evacuation, we needed a maintenance organisation that will respond when we needed them to,” he said.

The AMO is staffed by more than 20 highly trained aviation engineers who now are available round-the-clock each week.

Gouveia discouraged the reintroduction of Twin Otters, saying that the Caravan and Trislanders have resulted in a reduction of airfares to, for instance, Kaiteur Falls down from US$200 to US$145 per person.

Also speaking at the event were the President of the National Air Transport Association (NATA) and Minister of Tourism, Cathy Hughes.