by Rosemarie Sant of the GML ENTERPRISE DESK 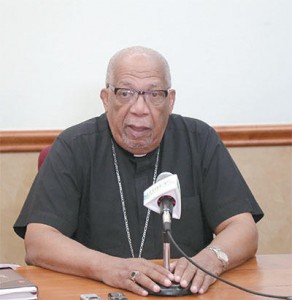 Trinidad and Tobago’s Law Association has signalled its support of a petition from the Catholic Church to pardon hundreds of remand prisoners who have been in jail without trial for periods exceeding the maximum sentence they would get if found guilty.

Law Association president Reginald Armour SC told the GML Enterprise Desk yesterday, “I support it and I am prepared to try to persuade the Council (of the Law Association) to support it. I expect they will, I have not spoken to them as yet but it will have to be done in a structured way.”

Armour clarified that his was not a carte blanche support.

“What I am supporting is the mercy and release for those persons who have already served the period of time on remand yard for which they would be sentenced for the crimes that they are charged with, that they be given a pardon and released.”

He said the proposal will have to be “looked at carefully, but in principle the conditions of remand yard are deplorable and it needs radical fixing, and to that extent I am prepared to support the Archbishop’s proposal in a structured way.”

Armour was responding to yesterday’s T&T Guardian lead story which detailed a proposal from Archbishop Joseph Harris, who is asking for a presidential pardon to be given to prisoners charged with minor offences held on remand for a long time.

The head of the local Roman Catholic Church proposed the idea of the pardon, which he said is linked to the ‘Jubilee Year of Mercy’ and has sent out letters to priests and parish administrators requesting that parishioners sign forms endorsing the petition and return them by May 26.

There are over 2,235 remand prisoners in the nation’s jails and close to 300 could benefit from such a proposal.

Former head of the Anglican Church, Bishop Clive Abdullah, also said he had no problem with the initiative. He told the GML Enterprise Desk, “I would support it.”

He recalled that in 1980 he headed a team commissioned by then prime minister Dr Eric Williams to look at the prison system and make recommendations.

That report, completed more than 35 years ago and submitted to the then government, recommended that the “judicial system needed to be speeded up so that people are not kept in prison for a long time.”

He said, “It is a travesty of justice for people to wait for years before their cases are heard.”

But head of the Inter Religious Organisation, Brother Harripersad Maharaj, says he is not in favour of the suggestion.

Maharaj said if any such initiative is taken “it would be like punishing the victims twice. If we just say mercy for you then we are causing a lot of pain to the victims.”

He told the GML Enterprise Desk, “Instead of just pardon, an appeal should be made to the Chief Justice that these cases be seen as a priority. The Chief Justice should be called upon to give priority to these minor cases involving persons spending a lengthy time in prison and set a timeline either four or six weeks for completion.”

This, he said, would ensure that “these persons are not just set free because if that happens it would be disadvantageous to the victims who would feel as if they were victimised twice. Psychologically, the victims would feel hurt a second time to know that the perpetrators are walking free.”

Maharaj also contends that given the times in which we live, with crime being what it is, “there is no guarantee that the person who is pardoned will not attack the same victims.”

He said, “I do not accept the point to pardon, but speedy justice with set timelines.”