Drug lord appears before Commission of Inquiry into CANU’s operations 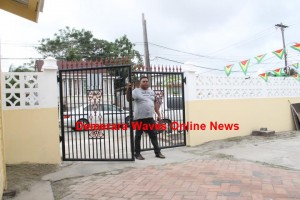 Self-confessed drug lord, Barry Dataram on Monday appeared before a one-man presidential inquiry into allegations that the Customs Anti-Narcotics Unit (CANU) has been colluding with drug traffickers.

Dataram entered the Ministry of the Presidency’s Department of the Public Service Office at approximately 9:53 AM.

Unaccompanied by a lawyer or anyone else, Dataram told the guard that he was “here to Mr. Lovell” in clear reference to the lone Commissioner, Retired Brigadier Bruce Lovell who was appointed by President David Granger to probe the allegations he leveled against  CANU in early February, 2016 on HGPTV News.

The guard pointed him upstairs to the Training Room where Lovell was expected to grill Dataram about the accusations he has leveled against the anti-drug agency which comes under the purview of the Ministry of Public Security.

Asked whether he planned to tell Lovell everything he knew about the drug trade, Dataram said he would have focused only on CANU. “I just going and talk basically about CANU, not nobody in this country, but CANU; not about  nobody or no person. I don’t know nobody business. I know about CANU. That is what I going and speak about,” he told Demerara Waves Online News.

Head of CANU, James Singh said he did not know when he would be asked to appear before the Commissioner of Inquiry.

Dataram had told HGPTV News that “CANU, them is the most corrupted, rogue security force in this country. They are the biggest drug dealer this country has. The same drug that they seize, half of it goes back on the street.”

Among the allegations that CANUthat GYD$5 million is  paid upfront by the trafficker and the remaining 50 percent is paid on arrival of the cocaine in the United States or Canada. Dataram has said that at least 30 to 40 percent of the 129 kilogrammes of cocaine seized from his home at Diamond, East Bank Demerara in April, 2015 is back on the streets.