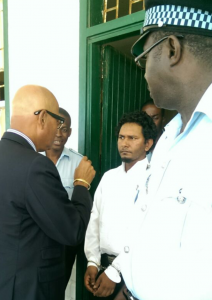 A second man was arraigned Monday for the murder of Simone Hackette whose body was found in a canal at Cummings Lodge, East Coast Demerara days after she had told family members that she was going to collect a parcel that had been sent by her child’s father from Mahdia.

Taxi driver Ranachal Singh of Good Faith, Mahaicony, East Coast Demerara was not required to plead to the charge that he allegedly murdered Simone Hackett of “C” Field, Sophia between April 16 and 19, 2016.

Sparendaam Magistrate, Zameena Ally-Seepaul remanded Singh to prison until May 18, 2016; the same day that his co-accused- Hackette’s  ex partner, Clevaughn “Quarters” Hamilton is expected to return to court.

The Police Prosecutor told the court that the investigators were yet to complete the file, but so far the probe has revealed that Singh, along with Hamilton, picked up Hamilton from the University of Guyana Access Road immediately east of that tertiary institution.

The court was told that Singh was aware that Hamilton had killed Hackette but nevertheless transported him to Mahdia after her decomposing body was found in a canal parallel to the access road.

Singh was arrested after his blood-stained vehicle was found by police at the gold mining township of Mahdia.

Hamilton was arraigned for Hackette’s murder on Friday, April 22, 2016.