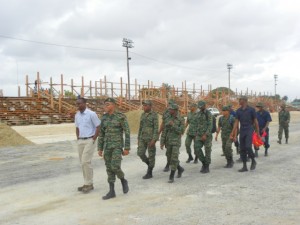 The Ministry of Public Infrastructure says it is moving apace to complete the D’Urban Park Development Project in time for the 50th anniversary celebrations, and Guyana Defence Force (GDF) personnel are now on site to help turn the project into a reality.

Fifteen soldiers on Monday, April 25, 2016 turned out at D’Urban Park and will be lending support to MPI’s Special Projects Unit (SPU) for the duration of the agency’s work. According to Captain Daniel Seeram of the GDF, the 15 soldiers include five mechanics and were deployed by Commander-in-Chief and Head of State, President David Granger.

Meanwhile, Head of SPU, Lawrence Mentis, explained that the agency’s work is moving apace. Amongst SPU’s works are the completion of the VIP parking area and the public parking area; the creation of access driveways; and the building of bridges. These works commenced on Friday April 22. Works have begun on the external parking lot for the public as well as the road for the national float parade, which will culminate at the site. 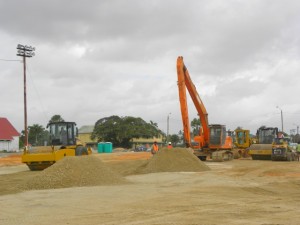 Mentis further explained that approximately 100 of the agency’s workers are onsite to ensure that SPU’s contribution to the project is completed, not only on time but to the highest possible standard.

“Things are progressing smoothly,” Mentis said, “We’ve had beautiful weather and the materials are coming in on time, as we expected.” He continued, “Once the weather permits and we’re able to keep up our current pace, we’ll be able to meet our deadline.”

The set deadline for SPU’s work – and the entire project – is May 12, two weeks before Independence Day. The outstanding works cover six areas. These are, roofing and remedial works for spectator bleachers; completion of superstructure, walls and roof for VIP stand; electrical wiring, lighting and power supply; access driveways and bridges; creation of sanitary facilities; and drainage works.