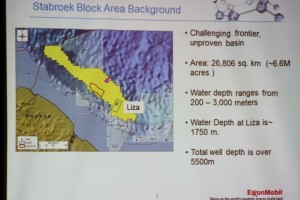 In what is described as a partnership to decrease risk, local oil exploration company Mid Atlantic Oil and Gas Inc. has teamed up with oil giant ExxonMobil in an agreement that will see the company exploring for oil on behalf of Mid Atlantic.

The local company has petroleum concessions in the offshore Guyana Basin in the general location of Exxon’s operation. Exxon is drilling a second well in the Stabroek Block following last May’s significant oil and gas find. The company’s Lisa -1 well is first on the 6.6-million acre Block with an estimated value 12 times the country’s Gross Domestic Product (GDP) and some 700 million barrels of oil to be drawn.

Outside of this, Exxon is hoping for another big score at their second well Lisa 2. They are expected to give the results of that exploration shortly.

However, Mid Atlantic which is run by Dr. Edris Dookie formerly of Canada-based CGX Energy Inc. is a fairly new company and, according to information, they have teamed up with the mining agency to make checks at that block.

It was explained that the agencies would have signed agreements allowing Exxon to drill on behalf of Mid-Atlantic. Sources close to the partnership said that the exploration agreement between the two sides would be one of de-risking. “While companies like Exxon have licenses to drill for petroleum, they would usually assess the risk of the venture. It is then in the company’s interest to “mitigate” the risk or what you call de-risking, which is usually done by a Joint Venture.”

It is the same methodology implemented by other such petroleum stakeholders such as Shell, Hess, and now Mid-Atlantic.

Mid Atlantic is currently holding an acreage on the Stabroek Block. It was noted that as part of a mandatory arrangement, after a certain time has passed an explorer may relinquish a block so as not to have it become dormant or holding on to it and not utilizing it.

“At this point, Mid-Atlantic’s Joint Venture like other parties is to mitigate risk, similar to Exxon’s Joint Venture with JHI.” Dr. Dookie did not immediately provide further information on his new partnership when contacted by Demerara Waves, but he indicated that all the relevant documentation is with the Guyana Geology and Mines Commission (GGMC).

The farming out of concessions to other companies also allows for bigger players to inject more expertise and technology into concessions that have a high potential.