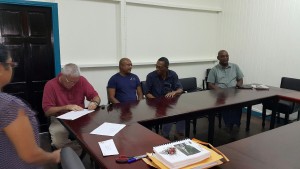 Representatives of CHEA – CentriasHidreletricas da Amazonia LTDA –ME; Torque – EPCM; and McVantage Products during the opening of the Expressions of Interest.

A Brazilian and a Barbadian company are among  five entities that are in the race to rehabilitate and operate the Moco-Moco Hydropower Plant in Lethem, the Ministry of Public Infrastructure said Monday.

Under a Build, Own, Operate, Transfer (BOOT) structure, power will be supplied to the Lethem Power Company grid under a negotiated and agreed Power Purchase Agreement, government said.

The ‘Expression of Interest’ (EOI) was initially published in January 2016 and the submissions were opened on Thursday March 31st, 2016 at the GEA.

The process, which was facilitated by Mrs. Seema Greene, Head of the Administrative and Human Resource Departments of GEA, and Mr. Valmiki Ramtahal, GEA’s Internal Auditor, was attended by representatives of three of the bidding companies: CHEA – CentriasHidreletricas da Amazonia LTDA –ME, Torque – EPCM, and McVantage Products.  The EOIs will be evaluated by the Ministry of Public Infrastructure.

In his opening remarks, Dr. Mahender Sharma, Chief Executive Officer of GEA, expressed gratitude to the bidders for the time and effort that went into preparing the submissions.

The 500 kW Moco-Moco hydropower station was built in the year 1999 and went out of operation in the year 2003 due to a landslide along the penstock alignment. The Government of Guyana has declared the rehabilitation of the station to be a priority project in order to strengthen the Lethem Power Company supplying the vicinity of Lethem and to substitute the diesel consumption with renewable energy with the aim of improving performance of the Company through cost effective solutions and the maximum possible annual energy production.

The rehabilitation of the Moco-Moco hydro power station is yet another initiative of the Government of Guyana as part of a holistic approach to sustainable economic growth which demonstrates its commitment to creating a climate resilient economy and the establishing of a green economy, the ministry said in a statement.

Previous: CDCs in Regions Five and Six get approval for financing for developmental projects
Next: Mid Atlantic, ExxonMobil partner in oil and exploration