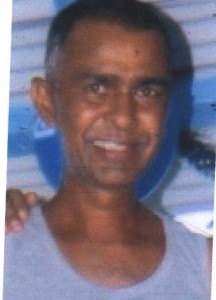 Police on Monday issued a wanted bulletin for a man in connection with the stabbing death of a man under conflicting circumstances.

Investigators say they want Hemraj  “Rickey Scrawley” Bramdeo for questioning in relation to the murder of r of Dellon “Chicken” Bradford which occurred on March 23, 2016 at Skull City, Patentia, West Bank Demerara.

Assuring that “all information will be treated with strict confidence,” the Guyana Police Force appealed for information that might lead to the arrest Bramdeo.

There are conflicting accounts about how Bradford met his death. One account is that the mother of his children had accused him of breaking into her residence and carting off GYD$200,000 and he punched her  in her face and her relatives retaliated by stabbing him. The other one circumstance is that he slapped her after she had refused to return home from a drinking spree to care for the children and then her relatives stabbed him.

After he collapsed, he was rushed to the Georgetown Public Hospital Corporation where he succumbed to stab wounds to his chest, stomach and arm-pit.

An arrest warrant had been issued for Bradford after he had refused to return to court to answer a robbery charge.