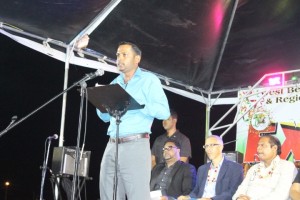 Region Five (Mahaica-Berbice) Chairman, Vickchand Ramphal addressing the opening of the West Berbice Expo at the Bath Settlement Ground. In the background are (left to right), President of the West Berbice Chamber of Commerce, Imran Sacoor; Minister of Business, Dominic Gaskin and Prime Minister Moses Nagamootoo.

The President of the West Berbice Chamber of Commerce, Imran Sacoor on Saturday urged government to provide concessions to rice farmers, amid concerns about the devastation to hundreds of acres of paddy caused by the prolonged drought.

Addressing the formal opening of the first West Berbice Business Expo being held at the Bath Settlement Community Centre Ground under the theme “Transforming Region Five for a Better Guyana,” Sacoor said rice farmers were in urgent need of relief. “Our farmers have been having some problems in the last crop and I endorse what our (Regional) Chairman said and I want to say that one of the ways in which we can assist our farmers is to be able to give them some tax concessions on the basic inputs of agriculture that is necessary to boost their cultivation,” he said.

Prior to Sacoor’s address, Region Five Chairman, Vickchand Ramphal raised serious concerns about the fate of the rice industry on which a huge segment of Region Five (Mahaica- Berbice) depends. “Over the last few months farmers have experienced a decline in prices for their produce also and with the present El Nino conditions, things might get even much more difficult for our farmers in this region which will affect the region’s economy a lot,” he said. 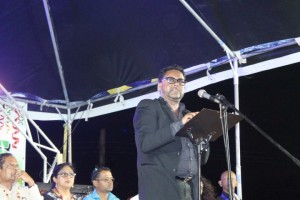 President of the West Berbice Chamber of Commerce, Imran Sacoor addressing the opening of the West Demerara Berbice Expo.

Ramphal complained about a decline in economic activity in Region Five, the largest rice-producing region in Guyana. He highlighted that most people in Region Five are connected to the rice industry which is the economic backbone there. “We cannot allow such a big industry to fall and as such this trade fair and expo can provide avenues for our farmers whereby they can look into other areas to make their produce more marketable by utilizing technologies and other forms of moving their business forward,” he said.

The Chairman of the opposition People’s Progressive Party (PPP)-controlled region’s call came against the background of the loss of the lucrative Venezuelan rice market several months ago. The PPP has accused the almost one year old coalition-led administration of mishandling Guyana-Venezuela relations resulting in Caracas ceasing rice purchases from Guyana.

The Region Five Chairman floated the idea of having a modern packaging plant there to help rice farmers become competitive and generate jobs.

Claiming that Region Five is Guyana’s largest agro-producer, Ramphal called for steps to be taken for the region to engage in value-added production.