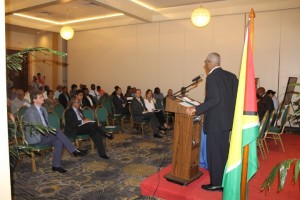 Five days after Guyana’s first Local Government Elections in more than 20 years, Guyana’s President David Granger on Thursday announced plans to promote the creation of capital towns in interior regions and he called for all municipalities to generate their own funds and become self-sustainable.

“Municipalities must be capable of weaning themselves off of government subvention and earn their keep. They must generate their own resources, financing and raise revenues to finance their development,” he said.

Granger further recommended that municipalities begin operating as corporate entities to earn sustainable revenues and profits. “Municipalities must function like corporations. This corporate status will allow them greater autonomy and financial independence. It will expand their revenue base and allow them ti invest their surplus revenue prudently,” he said.

Secretary of the GCCI, Nicholas Deygoo welcomed President Granger’s ideas. “It really would be good to see the takeoff and the development of the local areas so that at least basic transactions with the (Guyana) Revenue Authority or any other government agency can be done,” he said. 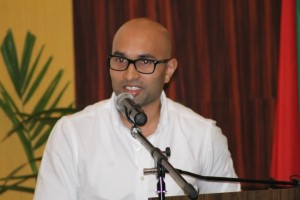 Secretary of the Georgetown Chamber of Commerce and Industry, Nicholas Deygoo delivering the vote of thanks at the closing of the Annual General Meeting.

The President expects that towns will eventually be able to finance their own infrastructure including the construction of aerodromes, bridges, wharves and sport facilities. He hopes that a corporate approach to town management would help them to partner with businesses in the processing of agriculture produce for local and international markets.

Arguing that the LGE, which were held on March 19, 2016, were an “opportunity for economic change,” he said the creation of regional capital towns would help stimulate innovation, investment and infrastructural development as well as reduce the cost of doing business, some of which is currently done in other regions. “Capital towns, therefore, have an important role to play in the development of our regions by encouraging growth,” he said. He reasoned that public infrastructure would reduce transportation cost, improve market access, increase competitiveness of production and stimulate output.  In the area of investment, he expects that this factor will spur new industries and aid in economic growth, create non-agriculture jobs such as banking, shipping, telecommunications, micro-financing and stimulate manufacturing at industrial estates. The President hopes that Information Communications Technology will help playing field between towns and rural areas.

The President said the time has come for a capital town mindset in which towns must move beyond traditional municipal services and also promote business, drive economic development and give leadership to Guyana’s regions. “Guyana will develop only if its regions are strong. Our regions must no longer be viewed as mere administrative appendages if central government. Our regions must become motors of economic growth,” he said.

Granger hopes that town councils will pay attention to the education of children by ensuring that they attend and remain in school.

The President also reiterated the need for Guyana’s towns to explore ways of using renewable energy, the recycling of waste, the adoption of economically sound practices, the reduction of pollution and help relieve unemployment and poverty.