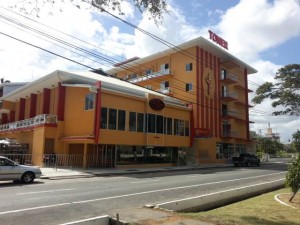 Tower, the hotel on Main Street.

The man, who bought Hotel Tower for a new entity, was a mid-level employee for one of the principals of the same hotel under the previous ownership.

Mathura was an Operations Manager of New Line Aqua Farms whose principal is Salim Juman Azeez. Azeez was also a key figure in Canal Hospitality Inc. one of the defendants in the foreclosure case, and also the lead negotiator with the then Ministry of Labour and the Clerical and Commercial Workers Union for the payment of outstanding wages, salaries and severance to more than 40 workers when the hotel closed its doors in May 2014.

The documents show that Mathura purchased Tower Hotel for S and S Mining Company Inc. of 17 Delph Street, Campbelville for GYD$766 million. Shawn Lovell is listed as a director of S and S Mining.

Tower has since undergone a multi-million dollar rehabilitation and re-modeling of sections of the interior.