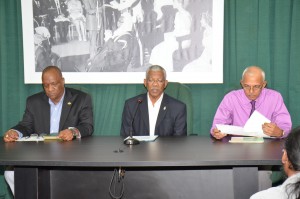 APNU+AFC’s candidates managed an impressive showing at the polls

President David Granger says that candidates from the two major political Parties, APNU+AFC and the People’s Progressive Party (PPP), that managed to secure victories in Friday’s Local Government Elections, were able to do so because of their political backing.

Preliminary results from yesterday’s polls indicate that candidates fielded by the APNU+AFC and the PPP were by and large successful.

The Coalition’s candidates also managed to secure most of the seats in the municipalities of Lethem, Bartica, Linden and New Amsterdam.

The PPP and APNU+AFC are tied for the township of Mabaruma. However, the PPP is reported to have won the townships of Rose Hall, Corriverton and Anna Regina.

At a press conference on Saturday, the President was asked whether candidates with the backing of major political parties won because of the endorsements.

His response was  “you are quite right” when asked whether the candidates in those areas would have won because of the political endorsements.

“Those persons have a shared vision; those persons share our vision for clean green communities. They share a vision for an integration of the work of central, regional and municipal councils in the achievement of a high quality of governance,” President Granger stated.

Despite this, the President was quick to note that the coalition has never prevented or obstructed individuals from contesting the elections as Independent Candidates.

“Yes I would say that people who share our vision will receive our encouragement,” he stated.