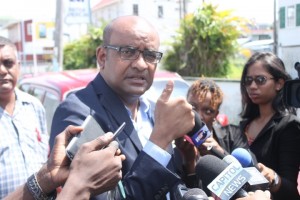 Opposition Leader, Bharrat Jagdeo speaking with the media shortly before voting in the 2015 Local Government Elections.

Opposition Leader, Bharrat Jagdeo was Friday morning unequivocal that his People’s Progressive Party Civic (PPPC) is first appealing to its traditional East Indian support base before reaching across to other segments of the society for political support-base.

“There is no hidden agenda here. Everyone knows where the bulk of the support of the two parties come from – APNU and PPP. A significant amount of our support comes from rural folks and Indo-Guyanese,” he said when asked whether the PPP has become an ethnic party.

Speaking with reporters outside St. John’s College, Waterloo Street, Georgetown where he cast his ballot in Local Government Elections, the former Guyanese leader said while non-traditional support has grown in areas such as Linden, Georgetown and New Amsterdam where infrastructural work was done, his party had failed in its political work while in office from 1992 to 2015. “Sometimes you do a lot of civil works but if you don’t follow up with the political work you don’t get the sort of benefit,” he said, adding that opponents portray a  skewed view of development.

He noted that the PPPC’s votes have grown in Linden, Region 10 from two percent in 1992 to 24 percent in 2006 but declined to about 17 percent in the 2011 and 2016 general and regional elections because his party had neglected the momentum there. “We intend to resume work once we first of all consolidate the base to work in areas that traditionally vote for us because we have significant successes in those votes,” he added.

Jagdeo reiterated that the PPPC’s priority immediately after the Local Government Elections is to intensify its campaign in both PPPC and APNU areas to regain the seat of central government. “We need to consolidate our base but we need to work hard in APNU-controlled areas to explain to people that our policies are good for everyone-all of the people of the country and that they have nothing and that they had nothing to fear in the past with us being in power, they have nothing to fear with us resuming power and that we value their support too,” he said. The PPP intends to attract more women, youth and older folks to join and support the PPPC.

Meanwhile, the former Guyanese leader hoped that the state-owned Guyana Sugar Corporation would give workers time-off to vote in Friday’s (March 18, 2016) Local Government Elections being held for the first time in 23 years.  “We know that is not an institutional instruction but that will be huge for us if it turns out to be true because the sugar-belt traditionally supported the PPP,” he said.

Jagdeo acknowledged that the turnout at local government elections up to 10 AM was poor, partly because of the fact that government has not declared polling day a National Holiday. Some observers forecast that more persons would cast their ballots late Friday afternoon after they would have returned home from work.