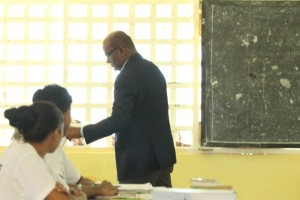 Opposition Leader, Bharrat Jagdeo’s occupation was given as “President” and his address as 52-53 Main Street, Georgetown when he went to cast his ballot, although he lives at north Goedverwagting, East Coast Demerara.

Jagdeo dismissed questions about why he did not change his address from State House where he resided while he was President six years ago. “I never transferred. It’s just something that happened,” he said. “I should, I should really…”It is unintentional, I should have done it.”

Moments before voting in Local Government Elections at St. John’s College, Waterloo Street, Georgetown, Jagdeo said he did not believe that his failure to change his address to the constituency contradicted the concept of representation, he said he had an interest in Georgetown where he owns a property at 300 New Garden Street, Queenstown. “I do have a property in the city… I am worried about the taxation policy, I spend a lot of my time there,” he said.

The former Guyanese leader said he felt no way when the polling station called out his name and  his occupation as “President.” “I don’t have anything about it. I know who I am,” he said.

Jagdeo said he was worried about signals being sent by Minister of Communities, Ronald Bulkan that there would be increased property taxes due to valuations as part of a plan to make constituencies self-sustaining.  He promised that if the PPP wins the Georgetown, his party would oppose plans to raise property taxes. “If the PPP wins the City, we will not do so. We will oppose any increase in bringing further hardships on people,” he said

The Opposition Leader acknowledged that there would be need to introduce certain revenue-generating measures but he flayed the last Council for doing so haphazardly while waiving taxes amounting to GYD$1 billion in contrast to GYD$800 million that was spent without public tendering.