Construction of Specialty Hospital to begin by mid-year 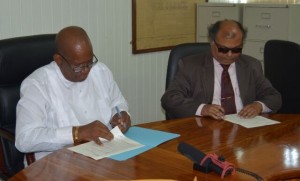 Construction of the controversial Specialty Hospital is expected to begin by year-end now that the Indian company, Fedders-Lloyd, has completed the design for the health care facility, Finance Minister Winston Jordan announced Wednesday.

He told a news conference that a contract would shortly be negotiated with Fedders-Lloyd for the construction of the facility at Liliendaal, East Coast Demerara. The Finance Minister assured that the construction of the Specialty Hospital would not cost more than the remaining US$13 million that has been provided through a line of credit by India’s EXIM Bank.

Jordan said that already the Indian company has modified designs for the Specialty Hospital to take into account the design and planting of piles done by Surendra Engineering. “We are at a stage where designs for the hospital have been completed. This was not done before,” he said.

He recalled that at the time when the contract with Surendra Engineering was terminated, only 20 percent of the designs had been completed.

Despite outcry by sections of the Guyanese society that Fedders-Lloyd had not been previously given the green light by the National Procurement and Tender Administration Board, he said an agreement would soon be signed with that company for the construction of the Specialty Hospital. “Fedders-Lloyd would be doing the construction,” he said.

The Guyana government has said that Surendra Engineering had defaulted in several areas of the contract.