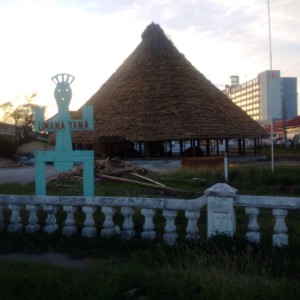 The Wai Wai  Amerindians-who travelled hundreds of miles to Kingston, Georgetown to rebuild the Umana Yana-were Friday finally paid for their labour, one day after their leaders protested that the multi-million dollar payment was taking too long.

Guyana’s Ministry of Indigenous Peoples Affairs announced that the 35 builders were paid “in full” GYD$14,175,000 for direct labour costs and the remaining GYD$16,364,138 was spent on materials and logistics.

The Ministry did not say why the payment was delayed but instead attacked sections of the media and an unnamed parliamentarian for the opposition People’s Progressive Party (PPP) for allegedly stoking divisions in conventional and social media.

“The Ministry is aware of the efforts by wicked elements to create an environment of mistrust between it and the builders in both the conventional and social media. These efforts are intended to destroy the excellent relations enjoyed by the Ministry and all Indigenous peoples, Villages and Communities.  Such efforts are wasted.

They shall never succeed.  No attempt to politicise, manipulate or misrepresent the innocuous and sincere statements made in good faith by our Wai Wai brothers, or any Indigenous group for that matter will succeed.”

After the concrete floor was cast from November to December, 2015 by the Ministry of Public Infrastructure, the Wai-Wais built the wooden and thatched roof structure from February 5, 2016  March 7, 2016.

One of the Toshaos had complained bitterly to Demerara Waves Online News and other sections of the media that they had been repeatedly promised that they would have been paid but on each occasion had ended up empty-handed.

He had said that one of the reasons given was that they had completed the construction ahead of schedule and no money had been readily available to pay them. Instead, they had been expected to return to Konashen and then come back to Gerogetown at their own expense to be paid.

The Toshao had also expressed concern about who would have paid for food while they were stranded in Georgetown. Now, the Ministry of Indigenous Peoples said the paid Wai-Wais would be afforded an opportunity to relax before returning to the southern Rupununi. “They will now have some time to visit key areas of the city and to engage in relaxing activities before returning to their homes in Region Nine.” 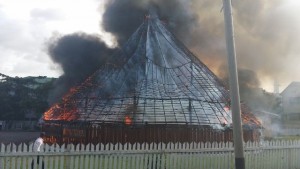 Government says the remaining works on the Umana Yana will resume on Monday. March 14, 2016.  The works remaining include completion of: the wall, fence, floor, stage and the electrification of the facility.  These works are expected to be completed by April 30.

The Umana Yana, which was burnt on September 9, 2014, was a conical palm thatched hut (benab) erected for the Non-Aligned Foreign Ministers Conference in Georgetown, Guyana in August 1972 as a V.I.P. Lounge and recreation centre.

The original structure was 55 feet (16.78 meters) high and is made from thatched allibanna and manicole palm leaves, and wallaba posts lashed together with mukru, turu and nibbi vines. No nails were used. It was erected by a team of about sixty Wai-Wai Amerindians, one of the nine indigenous tribes of Guyana. Fashioned like the Wai-Wai benabs or shelters which are found deep in Guyana’s interior, it occupied an area of 460 square metres, making it the largest structure of its kind in Guyana.

“Umana Yana” is a Wai-Wai word meaning “Meeting place of the people”. Renovated in 2010, the Umana Yana was gutted by a fire of electrical origin.